Modern day legends James Rodriguez, David Ospina, Yerry Mina, Falcao Garcia and Juan Guillermo Cuadrado are just some of the stars of the Colombian football team who represented our country at the 2019 Copa America. Colombia’s footballing talent is drawn from across the country with the players proud to carry the weight of their country’s expectations on their shoulders. 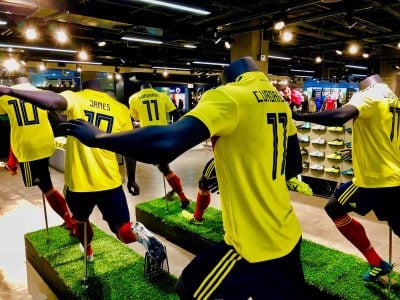 From the moment the 2019 Copa America kicked off in Brazil, all eyes were on Bayern Munich midfielder James Rodriguez. Born in the border city of Cucuta, the 27-year-old was the top scorer at the 2014 World Cup in Brazil and found himself once again in familiar territory. Praised by the world’s sports press on many occasions since, this figurehead of Colombian soccer is one of the stars of the national team today.

Another familiar face from the European big leagues was goalkeeper David Ospina, who was tasked with countering the shooting displays of world class forwards including Lionel Messi, Luis Suarez and Roberto Firmino. Born in Itagui, a small city on the outskirts of Medellin in the Valle de Aburra, Ospina was key to the Cafeteros’ success.

Check out: Medellin’s flower festival: a cultural tradition on parade

Yerry Mina was a revelation at the 2018 World Cup in Russia and currently plies his trade in the English Premier League. The 1.96m defender was born in Guachene, a small town in Cauca, in the south of Colombia and is known as much for his skills as his charisma and charm, as well as promoting Colombia’s Afro-Colombian culture. The 24-year-old, who played for Barcelona before moving to English side Everton, celebrates his goals with dance moves belonging to the rhythms of his region.

These stars of Colombian football were joined by ‘The Tiger’ Falcao Garcia, who plays for Monaco, Atletico Madrid’s Santiago Arias and Juan Guillermo Cuadrado, who plays for Juventus.

Brazil holds fond memories for Colombian football fans and also was the ideal place to celebrate the trophy. Not only is it a great setting for Colombian performance, the players and fans who watched, attended or played in a Colombia match were able to celebrate talent, commitment and the way football unites the country. The Copa America was the ideal stage to demonstrate how much Colombia has to offer the world.

Colombia, the cradle of champions

The story behind Colombia’s famous ‘beetles’

SUMMIT, the colombian team in the AR World Championship 2014