ariadna-
As Halloween events draw near, so does our desire to be spooked. Discover the real stories behind some of the most famous haunted places in Colombia. Prepare to get goosebumps!

Colombia is a marvelous country with wonderful places to experience, and others just to hear about, as the scary horror stories that precede them are an adventure only for the brave.

Now that we are getting closer to the season, let’s enjoy one of the best Halloween traditions and read up about some of the most haunted places in the world. Colombia has a list of its very own, and you can even experience it for yourself with a ghost tour!

Tequendama Falls, one of the haunted places in Colombia 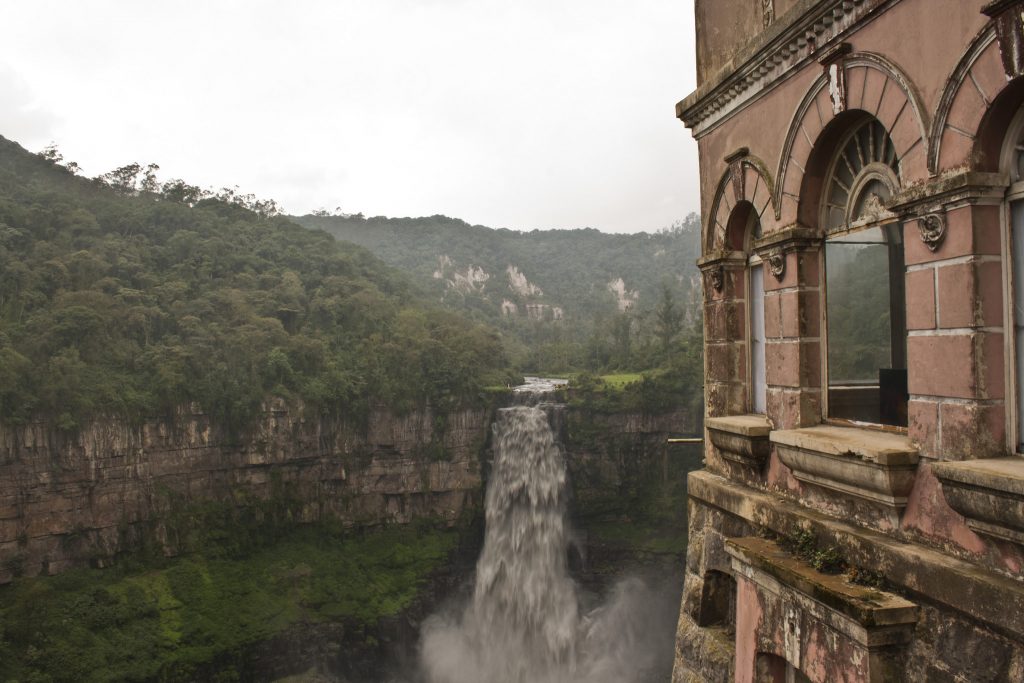 Discover the mysteries behind the Tequendama Falls in Colombia.

The Tequendama waterfall is 515 feet high and is formed by the waters of the Bogotá River. This natural attraction, first on our list of the most haunted places in Colombia, is located approximately 18 Miles southwest of Bogota and boasts a trove of paranormal stories dating back to the times of the Spanish colonization.

Some of the most popular stories surround the deaths incurred by indigenous tribes in the region, The Muiscas, who used to take prisoners of war to the falls and force them to jump to their deaths. Another side to this story is that as their own god figure ´Bochica’ created the waterfalls, those who jumped believed they would become eagles and gain freedom from slavery.

Paranormal events in the area are mainly concentrated at the side of the waterfall, in a nearby large house, at the ‘Refugio del Salto’ hotel, which later on became a local restaurant.

The scary horror stories that emerge from the area feature appearances by headless men and the sound of bar fights, not unlike those which would take place in the same room several centuries ago. Furthermore, even the locals claim to this day to see a wandering nun who accidentally fell into the waters that flow into what is now known as The Lake of the Dead. 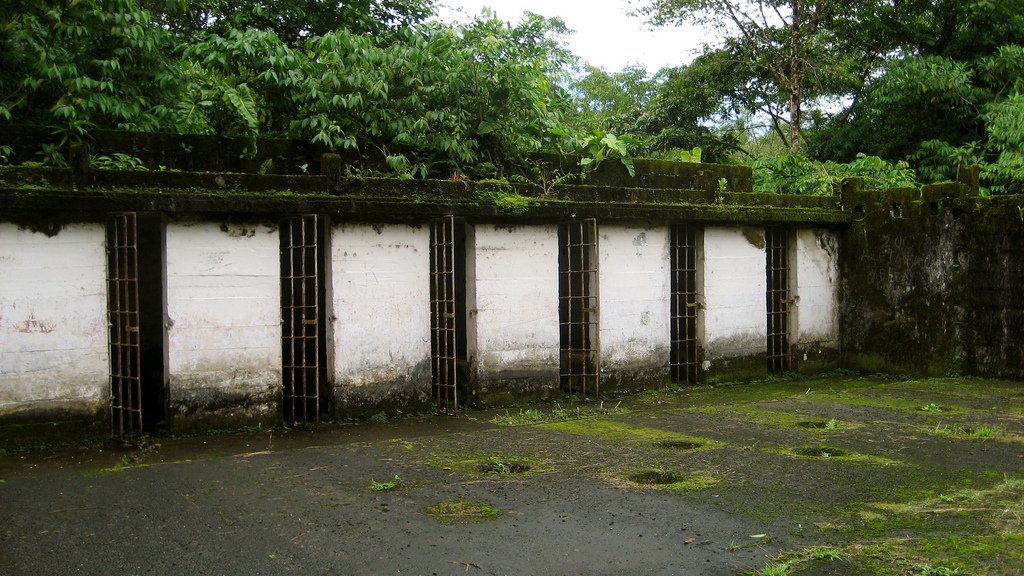 Gorgona Island was called the “Alcatraz of Latin America”, Today is a National Park.

The abandoned island of Gorgona is another destination on our list of the most haunted places in the country. Its name comes from the poisonous snakes that live on the island, reminiscent of Medusa, the most famous gorgon in Greek Mythology.

Located just 22 miles away from the Pacific coast of the department of Cauca, these ruins have become part of a National Natural Park which attracts hundreds of tourists annually and seeks to preserve the area’s abundant fauna and flora.

The maximum-security institution, which operated from 1960 to 1984, housed the most dangerous criminals in facilities that included small wooden cabins, punishment cells, and latrines. As the story goes, the prisoners had to survive scary horror stories of their own, as if they were competing in some Halloween activities contest. From facing animals such as sharks and poisonous snakes, to being exposed to the worst tropical diseases.

Entering Gorgona at that time was almost certainly a death sentence, just as it was trying to escape from it. It is on our list of most haunted places because it is said that even presently the prison’s strange energy is substantiated by fleeting shadows and unexplained noises, with some visitors even claiming to have experienced the sensation that someone is trying to hold them back while on the ghost tour. Many also report hearing the yelling and screaming of inmate spirits.

Today it is a place recognized for being a great diving spot with remarkable biodiversity, and is considered to be one of the best places to visit in Colombia.

Armero, leading the list of haunted places in Colombia 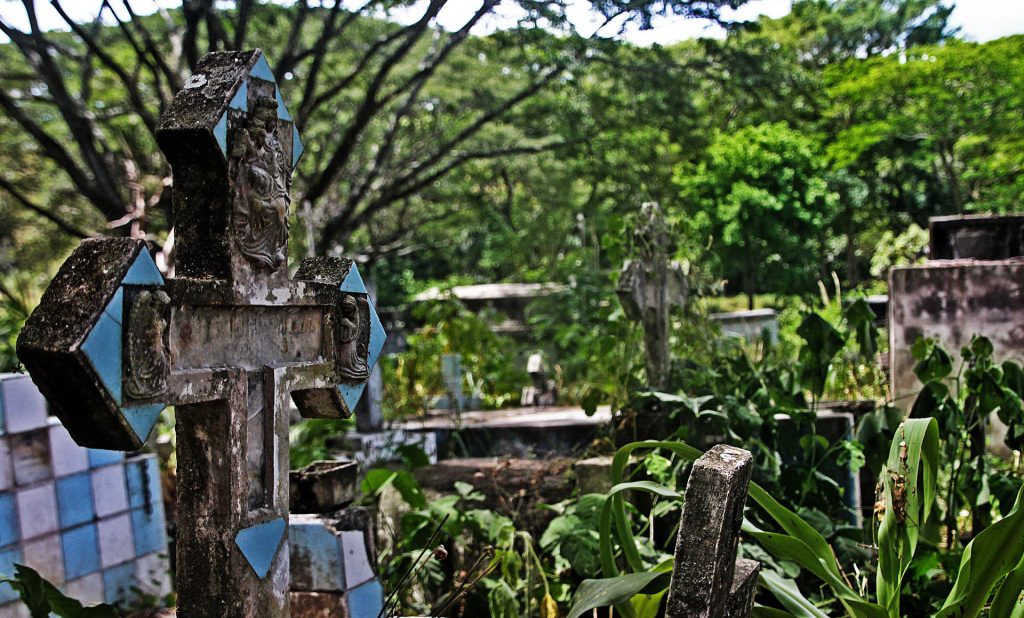 On the night of November 13, 1985, after sixty-nine years of inactivity, the ‘Nevado del Ruiz’ volcano erupted, burying the prosperous town of Armero, and with it more than 23,000 unsuspecting inhabitants, many of whom have never been found to this day. This is why it is often called the town with 30,000 ghosts.

Over time the physical space has become a cemetery, with hundreds of marked symbolic tombs standing out alongside the ruins of old buildings. The top of the church’s bell tower, which survived the tragedy, has been placed in the same place where the sacred precinct used to be.

Tourists come to this place to offer a prayer for the victims of the tragedy, while others are attracted by the scary horror stories. These visitors pursue a ghost tour of their own, and it is rumored possible to hear disembodied lamentations, especially in what remains of the first floor of the hospital. Those who experience the paranormal here say that these ghosts are not there to scare the living, but to cry out for a proper funeral which will allow them to gain closure and rest in peace for all eternity.

One of these stories involves a traveler who had to make a stop in Armero to rest. Out of pure curiosity, he took pictures of the place with his cell phone and noticed a house in ruins that had a sign that read “Tribute”. A few days later, when he saw the photo again, he noticed the image of a man under the arch of the entrance with his nose and mouth covered with a kind of scarf. It could be one of the many desperate souls that remain wandering this territory which was destroyed so abruptly.

Without a doubt, Armero is one of the most haunted places in the world. 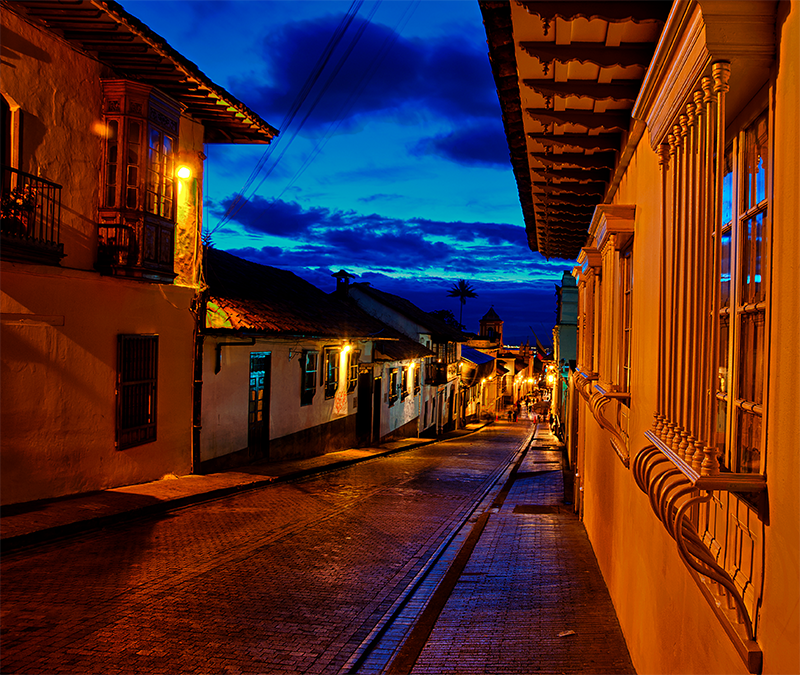 Dare to take the ghost tour at La Candelaria neighborhood in Bogota.

La Candelaria is the oldest neighborhood in the capital of Colombia. The historic center of Bogotá has not only become a cultural hub in the city, but an architectural and historical heritage for the whole country. Moreover, it has become a place that holds a great mystery, one that is reflected in its ostentatious houses and streets, making it one of the most haunted places in the world and in Colombia. In fact, one of the best Halloween traditions is to take its ghost tour and dare to encounter more than meets the eye.

It’s said that more than 8 ghosts over 400 years old appear at night in different spots of the neighborhood. One of them is ‘The prince of the pigeons”, the ghost of a blond-haired and blue-eyed child that appears in the early mornings carrying breadcrumbs in his hands. He walks the alleys to feed the pigeons, just as he used to almost three centuries ago.

It is said that he suffered from mental illness and believed that he was an important figure for these birds. Therefore, he protected them, and anyone who bothered the pigeons by throwing stones at them or being otherwise cruel “will have a very bad night”, as the ghost of the child-prince will not let them sleep.

There is another famous legend of La Candelaria which surrounds the ghost of a laundress who after passing away began to appear to her companions, leaving their clothes clean and spread out on the clotheslines.

Not all the spirits in this neighborhood are as friendly as the ones we mentioned, with so many others who died in different circumstances, schemes and mysteries that surrounded their gaining independence from the Spanish crown.

The leader of the haunted places in Colombia is, without a doubt, the Central Cemetery of Bogota 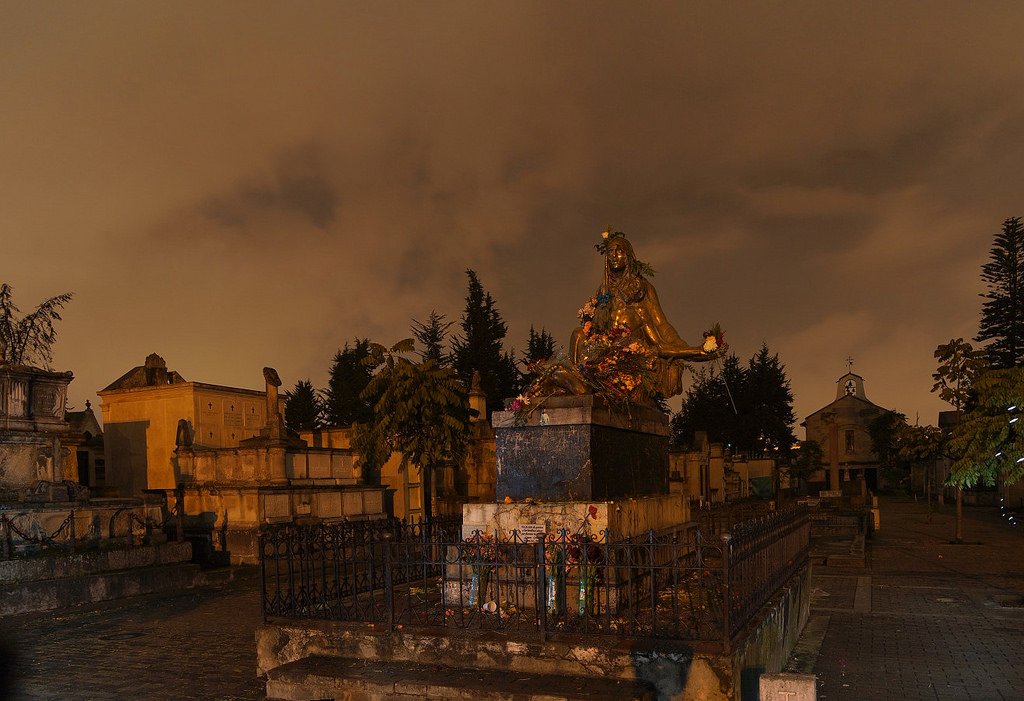 One of the places with more legends and myths of its residents is the Central Cemetery of Bogota.

The Central Cemetery is the oldest in Bogota. As if it was trying to welcome visitors to enjoy Halloween activities, the entrance bears an ominous message: ‘We await the resurrection of the dead‘. Maybe this is why it’s claimed that a man, apparently a monk in a long white dress, guards the place. He walks slowly with a halo that turns on and off, as if it was a lighthouse guiding lost souls to a safe resting place.

It is considered one of the spookiest places as it houses the remains of important national personalities such as former presidents, artists and businessmen. Among those is the famous German entrepreneur Leo Siegfried Kopp, founder of the Bavaria brewery (the biggest one in the country) who died in 1927. About 30 people line up daily to his statue to speak in his ear and ask him for help with any kind of favor, especially ones related to abundance and prosperity.

Many stories surround the cemetery, the most popular having to do with the grave and bronze statue of Elvira and Victoria Bodmer– two sisters who apparently died under suspicious circumstances. Some say it was a fire, others claim that it was a weird disease. Their tomb space is filled with flowers, sweets, and various toys. “so that the spirits of the girls come out to play.”

Those who work in the cemetery assure visitors that other presences may appear randomly, usually around an area known as the snail, a staircase that leads to a basement with multiple corridors full of tombs.

Why is Colombia the best country to travel? Your top 10 travel and tourism questions answered

Steps to Follow When Visiting Colombia for Health Procedures