publicador-
The Colombian Pacific coast is an idyllic place for whale watching, endowed with a magical atmosphere that only the whispers of its waves and the warmth of its waters can offer. There are plenty of reasons why humpback whales travel here from the southernmost part of the continent to give birth to their young.

From June to November each year, the Colombian Pacific coast has a special feel. The beautiful morning twilights, the sunny days, the red and orange hues of the sunsets, its tropical jungle, and its turbulent or calm waters are complemented by the dancing and chanting of whales that come here every year to give birth to their young. Whale watching is common in this remote and heavenly place in Colombia, where these colossal mammals flaunt their jumps, loins, and tails, along with the playfulness of the newborn calves, eager to explore the warm and tropical waters of the region.

During the sighting season, Colombia welcomes thousands of national and international tourists arriving anxious to watch this incredible and unforgettable natural spectacle. A journey of over 8,000 km from the South Pole that gives rise to the sighting of large groups of whales exploring the entire Colombian Pacific coast during the second half of the year, extending along the coasts of Nariño, Cauca, Valle del Cauca, and Chocó.

A country blessed by nature

Colombia welcomes humpback whales with open arms. They chose our country as the ideal place to give birth to their young during the coldest season of the South Pole, their place of origin. This is an annual visit that takes the same time as the gestation of the calves, which are born in Colombian territory and return to Antarctica as soon as the polar summer begins. Their visit is a privilege that thrills nationals and also people from all over the world that gather on their beaches to cherish the sublime chanting of the whales stretching on the horizon, and whose chants can last up to 50 minutes.

The arrival of these giants is absolutely impressive. They stroll along the coasts doing acrobatics, showing their magnificence, and snorting loudly in front of an expectant and awe-struck crowd that enjoys sighting under strict parameters of respect for the whales and for the environment. 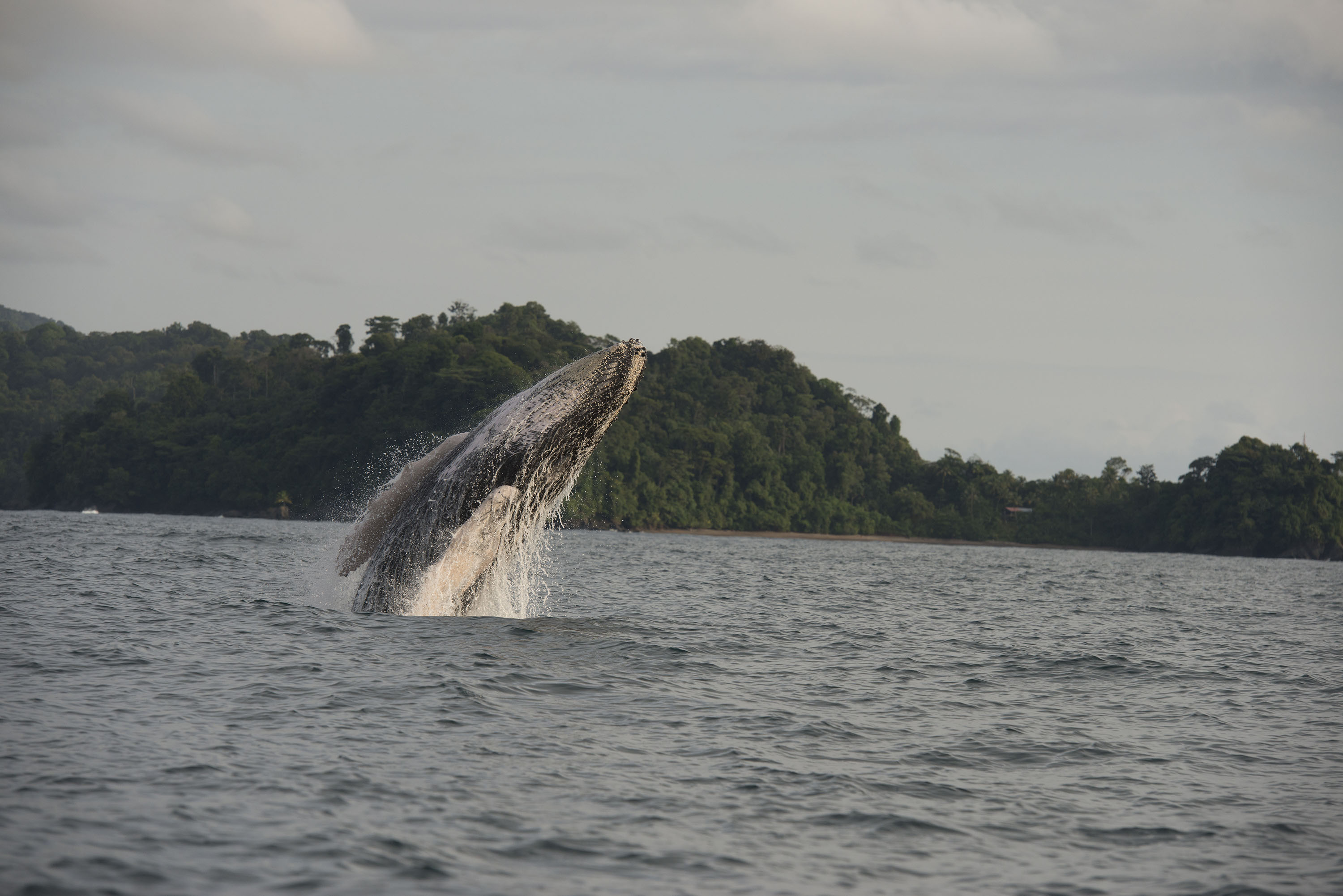 Travel along the Colombian Pacific coast

Thousands of humpback whales begin to arrive during the months of May and June, spreading along the 1,300 kilometers of the Pacific coast during their stay in Colombia, until the end of November. July, August, September, and October therefore become the ideal months for whale watching.

Every year, close to 100,000 tourists visit the region, choosing destinations such as the National Natural Parks of Gorgona, Uramba Bahía Málaga, and Utría, to spot the up to 5-meter long calves and the huge adult cetaceans of up to 18 meters long.

These are the main whale watching destinations:

Cali, capital of the department of Valle del Cauca, opens its doors to a number of local and international visitors during the sighting season. The “Sucursal del Cielo” as the city is known, is strategically located due to its proximity to the municipalities of Guapi (Cauca) and Buenaventura (Valle del Cauca), which are Pacific coastal populations along the path of humpback whales.

The department boasts the Uramba Bahía Málaga National Park, a favorite site for the mating rituals of whales and one of the places with the most sighting accounts. A destination for nature and extreme adventure lovers that cannot be missed, offering activities like kayaking or boat trips along the Pacific coast and nearby rivers, jungle and cliff walks, speleology, and many more.

To get to the park, visitors can travel by boat from Buenaventura to the towns of Juanchaco and Ladrilleros, near the tourist destination.

The famous and enigmatic Gorgona Island in the department of Cauca is just an hour and a half by boat from the municipality of Guapi, or four hours from Buenaventura. The island is a destination that can’t be missed for humpbacks on their visit to the Colombian Pacific coast. Here, 46 kilometers from the Cauca town of Guapi, is the National Natural Park of Gorgona, whose waters, famous among national and foreign tourists for their natural riches and biodiversity, register a large number of whale and calf accounts during the sighting season.

Guapi hosts 11 types of whales and dolphins, 12 kinds of coral reefs, 75 species of migratory birds, 41 species of reptiles, and 723 species of flora, making this an incredible destination for rest. Visitors are surrounded by the sea and the jungle, embellished by the chanting of the cetaceans occasionally emerging from the horizon.

To get there, you can take a flight from Cali to Guapi or Buenaventura and then hop on the boat that will take you to the island.

On the north Pacific coast, the Serranía del Baudó sinks into the ocean, forming bays and inlets and creating an impressive jungle area with immense biodiversity. Towards the south and the west there are rivers and cliffs in the middle of the thick jungle, whose shoreline flaunts virgin beaches surrounded by mangroves and by the largest ocean in the world.

Chocó is home to indigenous and black communities that preserve the beauty and majesty of nature. You can only get there by sea or by air. One of the main humpback whale destinations, which welcomes the avid cetacean giants with a calm and warm place for conception. The Ensenada de Utría National Park (Nuquí), one of the most bio-diverse places in the world and considered the humpback whales’ delivery room, and the Cupica Bay, located further north in the territory of Bahía Solano, are must-see destinations during the whale watching season.

You can get there by air from Medellín or Quibdó and by sea from Buenaventura or Bahía Solano.

A chance to meet them

On the high seas, boatmen hope to spot the spraying of water vapor on the horizon, near the Colombian Pacific beaches, which is a sign that a humpback whale will soon appear. They will be the ones to reward the patience of visitors, who are making an effort to catch a breeze, longing to get a glimpse in that dream place, disconnected from the world and reality. The only condition to enjoy such a great natural event is to follow the instructions of the authorized tourist staff and to respect nature.

Colombia’s Pacific region provides protected areas for humpback whales to give birth to their offspring. Gorgona Island, Málaga Bay, and Cupica Bay, provide the necessary conditions, away from potential predators. We invite you to enjoy all these wonderful destinations that show #TheBestOfColombia