publicador-
Allow us to introduce you to the unique country of Colombia. A haven of biodiversity, with more than 50,000 species of animals and plants. Beautiful nature, exotic animals and a variety of orchid flowers will convince you that Colombia is one of the most extraordinary places on Earth.

Colombia’s location, a privilege for biodiversity

Species diversity is amazing, isn’t it? Even more so when you’re surrounded by such a variety of animals, some of them endemic species, across the beautiful landscapes of a single country. How could this be possible? Here’s the secret behind this incredible phenomenon in Colombia.

Colombia’s location is unique. The country is located in the middle of South America, the Antilles, and part of Central America. These areas, which broadly coincide with the continents, are characterized by a wide distribution of groups of animals and plants due to the varying environmental conditions of each region and the development of the continents over time.

Additionally, Colombia is surrounded by three huge mountains which split the country into five natural regions: Andes, Pacific, Caribbean, Amazon, and the Llanos (plains). These regions offer an impressive range of climates and beautiful landscapes at varying altitudes.

Colombia is conveniently located in the equatorial tropics. Because of this, it has a diverse topography with a variety of climates and ecosystems which boost its biodiversity, currently accounting for 10% of Earth’s flora and fauna.

Well-known as the second-most biodiverse country in the world

Colombia ranks second amongst the 12 most biodiverse countries in the world. According to the 2019 Biodiversity Information System in Colombia, there are 51,330 species registered in the country, with more than 1,920 bird species, 528 types of mammals, and 1,521 species of fish. 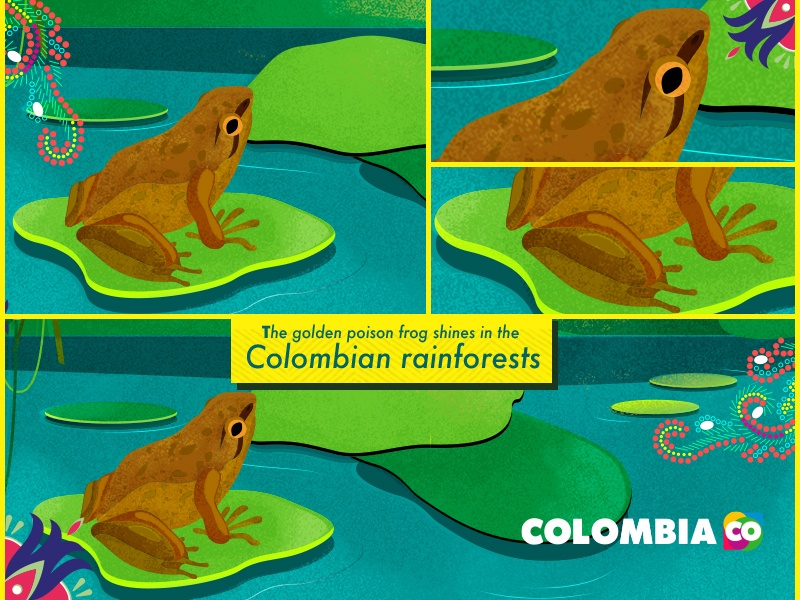 Colombia also has the third-highest number of endemic species after Brazil and Indonesia. According to the Humboldt Institute, 14% of all species living in Colombia are endemic species. This means that these species can only be found here. The regions with the greatest concentration of this biodiversity are the Amazon, the Andes, the inter-Andean valleys, and the Chocó region. Let’s dive deeper into Colombia’s species biodiversity.

Flora in Colombia is also diverse and welcoming. This country has moorlands, jungles, savannahs, forests, wetlands, and even plains. Most of them are national natural parks, where you can find fruit trees and other flora biodiversity such as orchid flowers, palms, magnolias, and more.

With a biodiversity of over 250 types of palms, Colombia places first in the world for this categorical variety. It’s so important that its national tree is the wax palm, native to Colombian forests, which can reach 70 meters in height.

What is the country doing to protect its biodiversity?

Colombia signed a Biological Diversity Agreement and a National Biodiversity Policy in 1994, a commitment to the conservation of its species richness. After this decision, the country consolidated the National System of Protected Areas (SINAP) with 1,116 protected areas, representing 15% of the national territory today.

Since 2016, the country has made more than 16 scientific bio expeditions by The Colombian Bio National Programme, with support from universities and other institutions. Most of them have been made in post- conflict areas. This has led to the  discovery of more than 150 new species which fall under the group of animals and group of plants categories.

Also, as a contribution to biodiversity conservation and Colombia’s sustainable economic growth, the Global Challenges Research Fund (GCRF) created the GROW-Colombia project in partnership with the Earlham Institute, the University of Sydney and more than 30 Colombian institutions such as Sinchi Institute, Humboldt Institute, Colciencias and the Amazon University. This project aims to reduce zero net deforestation by 2020, employing approximately 30% of people in rural regions and promoting local biodiversity.

This project seeks to preserve, restore and manage Colombian biodiversity through responsible innovation. One of the programs consists of working with ex-Colombian FARC members, training them with fundamental skills and knowledge to understand and protect biodiversity as well as to identify nature’s potential to generate sustainable productive projects.

Come explore Colombia’s biodiversity. Appreciate the biodiversity that surrounds you here, soak in the beautiful nature in all of its colors, shapes, and sounds.

Without a doubt, Colombia is a country with many wonderful things to discover. In fact, Disney made a movie inspired in Colombia: Encanto. A beautiful show of Colombia’s traditions and characteristics that make this country so unique. Click here to know more.

Why should a Nature-Lover come to Colombia?
Six incredible Colombian animals you have to see in the wild
Colombia’s Famously Fearsome Animals