The Colombian film industry each time closer to the Oscars

publicador-
The Colombian film industry has been changing over the past 16 years thanks to the creation of laws which main focus is to promote cinema production in the country.

In particular, through economic incentives for national and international production companies that decide to hold pre-production, production or post-production processes in Colombia.

The first one is the film law which was created in 2003 and its prime focus is to boost a more sustainable Colombian film industry. Proimágenes is the entity that foresees and manages this law that provides incentive grants through the film development fund. Consequently, the economic resources that finance the reserve are the result of the tax collection of movie distributors, exhibitors, and film producers. Especially, to maintain the financial aid for the creation of new short films, movies, and documentaries, among others.

The second one is the filming law cash rebate, created in 2012 as the result of the positive impact on the film law in the Colombian film industry. In particular, because this one offers a cash rebate up to 40% of some of the production expenses during the realization of a film in Colombia. Also, it offers 20% on the logistic services paid during the same process.

Due to the creation of both laws, the Colombian film industry grew significantly. Over 200 Colombian films were produced in the country since. Some of them along with international production companies and others with just the local ones. In the same way, these policies were able to put Colombia’s workforce and talent to the global cinema service. Furthermore, under the world´s cinema production scope to be considered a great destination to shoot A-list audiovisual content.

As a result, we would like to share some of the most recent and internationally acclaimed movies that the new Colombian film industry gave birth. 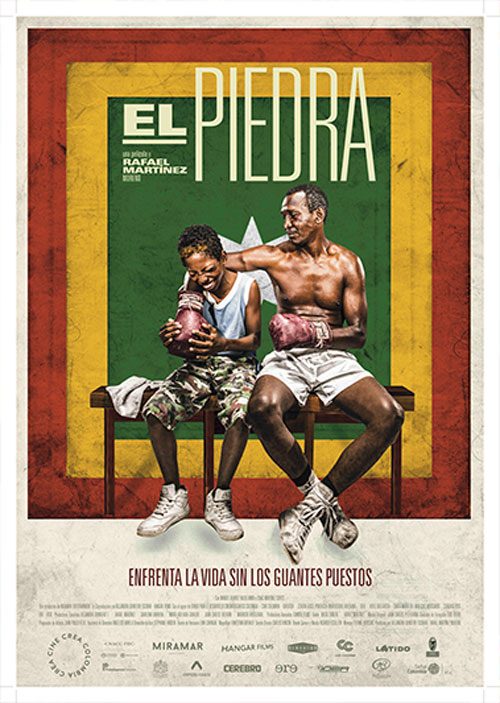 El Piedra tells the story of Reinaldo “El Piedra” (the stone) Salgado. Who is nicknamed like that due to the glorious past he experienced during the best days of his boxing career. However, a lot has changed since his nickname now refers to the fact that in the present, he makes a living as a “bait”. Fighting in setup encounters where he does not have the chance to win.

One day, Breyder, a kid claiming to be his son, appears into his life with the hope to learn boxing from his estranged father. Both father and son will start a journey that will bond them in a relationship they didn’t know they needed.

Behind this Colombian film

As the directorial debut of Rafael Martínez -who was born and raised in Cartagena- part of the main focus of the film is to showcase a side of the city that is unknown to the tourist barrier and even to the locals. On the other side, this Colombian film aims to share a father-son story while making visible the real-story of several former boxing champions through the life of the main character. Former legends of the golden boxing era in Cartagena make appearances in cameos during the movie.

The film also won the FDC funds from Proimágenes Colombia as many other recent productions of the Colombian film industry.

International awards for this Colombian movie

Shot with natural Colombian actors who just followed the main guidelines of the script in each scene for more realness, this Colombian film has gained international attention as a result of the empathy they transmit to the audience. Especially, like the one experienced in Huelva, Spain during the screening of the movie that made them winners of the Prize ‘Key of freedom’, granted by the inmates of the Huelva Prison Center. Also, they won the prize for the Most Solidarity Film in the 44th edition of the Huelva Iberoamerican Film Festival.

Currently, the actor that played the part of “El Piedra”, Manuel Álvarez, received his first nomination for best actor at the Macondo awards that grants and honors talent in the Colombian Film Industry. The nomination is the result of the voting process from fellow Colombian actors.

Colombian movie set in Medellín tells the story of Paula, a young undergraduate student whose father is murdered in front of her. After trying to seek justice with the local authorities without results and an accidental encounter with her dad’s assassin, Paula will start her own journey. Her desire for revenge will become her number one drive in the same way her own humanity will be tested.

Curious facts about this Colombian film

As an autobiographical movie, director Laura Mora seeks to explore a cathartic expose from her personal story with a twist that found in dreams of her own. After her father’s death, Laura decided to move to Australia and study film direction and production. One day, she dreamed that she was on a hill smoking with a guy who turned to her and said: “My name is Jesús and I killed your father”. From that day, she decided to keep a journal named “conversations with Jesus” that would later develop into the script of this very acclaimed Colombian movie.

When Laura returned to the country, she was surprised to find the two laws that incentivizes movie production in the Colombian film industry. Hence, the movie was produced thanks to the beneficiary Film Development-FDC.

This Colombian movie has won over twelve awards in international festivals, without including special mentions in countries such as Cuba, Egipt, Mexico, Spain, and the U.S. Some of the categories include best new director, feature film debut, and best film. A great score for the Colombian film industry.

Some of the festivals where this Colombian movie premiered and screened are:

The Colombian film as the official selection in international festivals

In Addition, this Colombian movie just entered in the official selection for a cinema festival in Germany to compete for the “Great talent award”. Furthermore, it will be airing at another festival in El Cairo, Egypt under the theme “International overview”. Although the movie didn’t make the official selection for Venice and Busan International Film Festivals, the producers received a letter from the organizers highlighting the great work and complimenting how well received the movie was.

Not only the movie was purchased by HBO to stream it in the U.S., Canada and Puerto Rico, but also LATAM airlines is airing it on its on air movie selection.

Without a doubt, the Colombian Film Industry is in a great moment. Both, the film law and the filming law, are an invitation to all international producers to come to the country to produce more movies, generate jobs and showcase #TheBestOfColombia.