Find out how an invention made by an industrial designer could contribute to the healthcare and rehabilitation of disabled children.

Did you know that a Colombian project has been awarded more than five international design prizes? The inventor is Carlos Arturo Torres, a young man who, after completing his undergraduate degree in Colombia, traveled to Sweden to complete a Masters and, as part of his research project, created a prosthetic arm for children with disabilities that can be put together with Lego bricks.

Marca País Colombia spoke to Carlos Arturo about the project, which was implemented for the first time with a boy from the Cirec Foundation, and also about his plans for worldwide expansion.

How did you get into product design?

My work consists of developing concepts for the future. I am, in one way or another, a conceptual designer, who creates visions of what a product can become, starting off with a basic need. I then propose concepts that are to become tangible through a design, a model or a prototype. 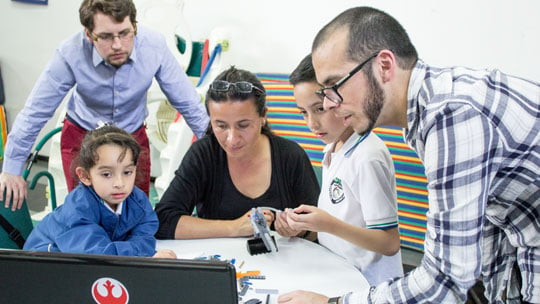 Is that how the prosthetics project came about?

The project took place in the middle of my Masters at UMEA University. I did my Masters at LEGO’s research department in Denmark. I started to realize all that could be done with LEGO bricks, and discovered that it is a social tool: You make friends, explore things and learn.

I wanted to experiment in that field by using those social dynamics to erase disability in some way. The idea of amputees was always at the back of my mind, and I thought about giving the same abilities that anyone has to children who, for whatever reason, have had limbs amputated.

In addition, I wanted to do something for my country. I already knew about the Cirec Foundation, which works with people with disabilities, and at the same time I understood that rehabilitation isn’t just about putting on a prosthesis; it also includes loads of psychological and social aspects.

How did you get in touch with Cirec?

I was on vacation in Colombia and met Daniel Gómez, the director of the foundation. We spoke about my project, and he offered me training to learn about what prostheses involve and to understand the rehabilitation process for a disabled child. 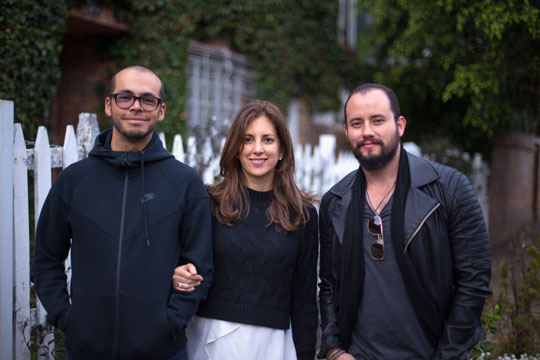 How do prosthetics work?

All prostheses are modules that stay fixed after some time. What I did was separate the prosthesis into more efficient modules: one module that communicates with the stump and has sensors that reach the operational module, called muscle, which works with a LEGO Mindstorms motor. The third module was conceived to provide a functional hand and an aesthetic that breaks with convention.

I designed a specific piece that also interacts with the entire LEGO system, so you can create multiple prostheses options with pre-created playsets that work perfectly. If you want you can even hack the Batmobile and put it on your arm!

Why prostheses for children?

Because traditional prostheses aren’t made in children’s sizes, are heavy and don’t have an aesthetic that children are comfortable with.

Also, they find ways of doing things without arms. Prosthetic legs are used by everyone because they make the difference in whether you can walk or not. But you are functional without an arm. A huge effort is needed so that they can use them at all times. 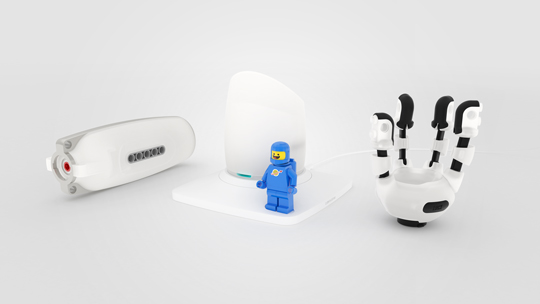 Also, social interactions are more interesting. You can think of holding science fairs at educational institutions and ask everyone to create content using LEGO for a disabled classmate.

How did the prototype trial in Colombia go?

We created two sets: a digger and a spaceship. The complexity of the digger was intended to test the interaction with people around us. We showed Darío (the boy involved with the trial) what the prosthesis could be like and set him the challenge. He started to put it together, and this proved one of the dynamics that I wanted to see with the LEGOs: For it the process to flow there needs to be a leader, and the child with a disability never assumes that role, but in this case, it worked! Everyone wanted to take part… When we finished, it was a revelation to see that he could put it on his arm. I couldn’t believe it! 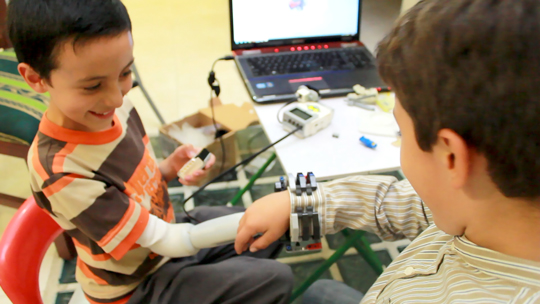 What is the next stage of the project?

There are still several steps; our current prototype is 0.5, if I can put it like that. We hope to get to 1.0 by December, without cables and with a remote control to allow more interaction with the prosthesis. We need a lot of resources to reach 2.0 and implement biometric sensors; 3.0 will be the version that is almost ready for production and sale, after validating lots of things with different prostheses around the world.

How have people responded?

The project has been on websites like Wired and The Guardian. We have received five product design awards, and made it into the Index Award alongside world-class projects. All of this is very important because it reassures the investor.

LEGO has the biggest space at the Maker Faire in New York, and the project will be there. The idea is to share the piece I designed with the global community and put the instructions on the Internet, so that kids can download them and put them into practice.

What are your aims for the project?

To reach a global market. When I presented it to Future Lab (LEGO) and to Cirec, I wanted to obtain funds to develop the project. For now it’s just a prototype. First we have to finish it and give it to Darío.

As a Colombian, why do you believe the project has been successful?

Colombians are resourceful! We’ve worked wonders with the budgets I’ve handled. (Laughs). And we are sensitive: despite the fact that there being people aware of everything that goes on in the world, I’ve found that in Colombia we are truly sensitive to emotions, and this enables connections on many levels.

Finally, we have something to compete with and work on everywhere in the world. At times we underestimate our education just because we are Colombians.

Through a fund-raising campaign organized by the agency Publicis, which has also received international awards, the LEGO prosthesis will change the lives of many children. Carlos Arturo Torres proves that, when it comes to innovation, The Answer is Colombia.