Colombia-
Colombia is often said to be a dozen countries in one, because its regions have such distinct identities. Modern Colombia was born with indigenous tribes, European conquerors and West African slaves, all of whom brought their own cultures to the mix. That may explain why Colombia has such variety today, from food and music to language and customs

Bogota became famous being the best place to learn spanish. 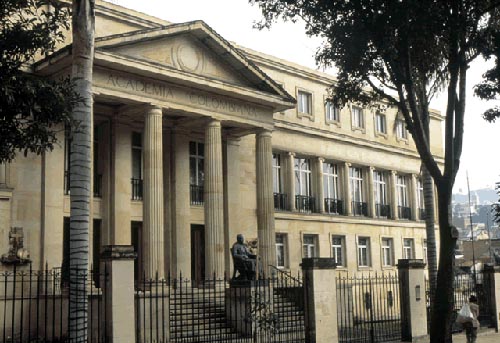 Even today, locals still delight in using the full scope of the language, with their distinctive, clear pronunciation. That has led some linguists to declare Colombian Spanish “the best in the world”. More than 2,000 people a year now travel to Colombia to learn Spanish and study at courses in the country’s top universities.

Bogota is still the most popular choice, especially given the lively atmosphere at its universities, some of which are housed in the city’s oldest buildings. The most prestigious courses include the one at the National University, which is two hours of instruction per day, Monday to Friday and the course at Los Andes University, which is 12.5 hours per week.

Both the National University and Los Andes are among the highest-ranked universities in Latin America. Their Spanish courses feature up to seven levels, or modules. Some students choose to study as complete beginners, while others are assigned a course depending on their ability, which is determined by an exam.

Other popular Bogota choices include the bustling Javeriana University, which offers four hours of instruction per day for four weeks and Externado University, which offers three hours per day, Monday to Thursday, for six weeks in the city’s colonial centre. Those who prefer less hustle and bustle head for the leafy campus at La Sabana University, in a small town just outside Bogota. La Sabana offers up to 80 hours of Spanish courses per week, including summer immersion programs.

In fact, Colombia’s capital offers plenty of choice and most universities now offer Spanish courses for foreign students. Prices range from three to 30 US dollars per hour and class sizes range from private tuition to groups of up to 20 students.

But learning Spanish in Colombia is not all about Bogota. Plenty of visitors like to combine their language learning with some fun on the country’s Caribbean coast, practising their verbs and vocabulary on palm-fringed beaches.

Many head for the imposing walls of Cartagena de Indias and the city’s Tecnologica de Bolivar University, which offers three levels of Spanish for four weeks at 25 hours per week. Other students head for the coastal city of Barranquilla, just down the road, with courses at Universidad del Norte and Simon Bolivar University.

And then there is Medellin. Colombia’s second biggest city sits in the heart of the nation’s coffee district. Medellin citizens are known for their friendly ways in the “City of Eternal Spring” and most students combine their studies with weekend trips to coffee haciendas in the region’s rolling hills. Popular options in Medellin include Antioquia University, which offers up to 80 hours of instruction per week and EAFIT University, which offers four hours of classes a day for two weeks.

Those who prefer a more laid-back vibe head for Manizales, a smaller coffee district city. There Caldas University offers courses for foreign students as does the Manizales Catholic University, which offers up to 60 hours per week, for eight weeks. The Universidad Tecnologica de Pereira, another smaller coffee district city, offers 40 hours of Spanish classes per week, for eight weeks.

Students who want to try out their salsa-dancing shoes may opt for the city of Cali and the Universidad del Valle, which offers 48 hours a week for three weeks. Other students may choose the city of Bucaramanga in Santander, where the Universidad Industrial de Santander offers 10 hours of Spanish classes a week, for a fortnight.

Besides the country’s top universities, there are dozens of private schools offering Spanish tuition with varying prices and course lengths. If Colombia really does have the best Spanish in the world – it may just have the best options for learning it too.

To learn more about Colombia:

Gabo beyond One hundred years solitude

What should I visit in Cali? Basic guide to the salsa capital

Mixology in Colombia: A guide to the best and most popular cocktails