Colombia-
The UGI building built top-down; the Colpatria Tower, the scene of one of the most important climbing races in the […]

The UGI building built top-down; the Colpatria Tower, the scene of one of the most important climbing races in the world, and the Novartis building, an example of sustainable construction in the region, are three of the buildings that have marked the sector in Colombia and have placed the country at the forefront of infrastructure and development.

Find out more about these buildings, considered by the Colombian Chamber of Construction as milestones of architecture in Colombia.

UGI, the building that was built in reverse

Built between 1973 and 1974 in Bogota by a team led by the architect Hernando Vargas Rubiano and the engineer Guillermo González Zuleta, the UGI building is one of the most important milestones of Colombian architecture because it is a construction that was built from the top down.

According to the engineer Hernando Vargas Caicedo, a professor at the University of Los Andes in Bogota, in an interview with Canal Capital, the construction of a building located in the vicinity of the Río Arzobispo presented a major problem because of the size of the plot. “It was so narrow to build an office building, that after putting the columns, these would form an impassable barrier for the parking lots and also for the size of the office,” he said.

After hearing of the work of German architect Fritz Rafeiner, who in his book “Construction of tall buildings” [“Hochhäuser” in the original German] that showed the construction of a building with a descending nuclear system (that is, top-down), Hernando Vargas Rubian’s team decided to use this technique to maximize the available space.

After the refusal of several engineers, Guillermo González Zuleta joined the project and it was thus that the calculations for the UGI building started to be a reality.

Besides solving the problem of space, this system enabled to build faster the building. “We did not have the problem of having to stop because of the rain, because we were always protected from the water,” says Hernando Vargas Caicedo, son of Vargas Rubiano.

For the development of the works a single column was designed of 35 centimeters in thickness and hollow inside, supported on 12 piles more than 28 meters deep that were dug manually.

To make the building earthquake resistant, four additional piles were added at the ends interconnected through a tie beam, so that the center of gravity of the building is supported in just one place.

Following the Avianca building fire in July 1973, Hernando Vargas Rubiano’s team decided to equip the building with a helipad to facilitate evacuation should it be necessary.

The UGI building was one of the most important works of the engineer Guillermo González Zuleta, who was also in charge of the works of other landmarks in Colombia as the Atanasio Girardot stadium in Medellin; the Vargas Swamp Lancers in Paipa; the Campin Coliseum in Bogota, and the Pascual Guerrero Stadium in Cali.

Located in the area of San Diego, in Bogota, the Colpatria Tower is 196 meters high and has 48 floors, making it the tallest building in Colombia and the fourth highest in South America.

The construction of the tower, which began in 1978 and ended a year later, was entrusted to the company Pizano, Pradilla, Caro y Restrepo Ltda.

Because it is located in an area of expansive clays –that is, that they change volume with moisture, for the construction of the Colpatria Tower an excavation 50 meters deep was made and a platform was installed on which the 24 caissons rest. More than 6,000 cubic meters of concrete were used in this procedure.

Since 2005 the building features prominently in the sporting circuit thanks to the race Climb the Colpatria Tower and in 2010 the competition became the last stop of Towerrunning World Cup, a global circuit that brings together more than 160 climbing races of the world’s tallest buildings.

The building is also one of the main tourist attractions of Bogota since on Fridays, Saturdays and Sundays the rooftop operates as a viewpoint from where you can see the entire city. 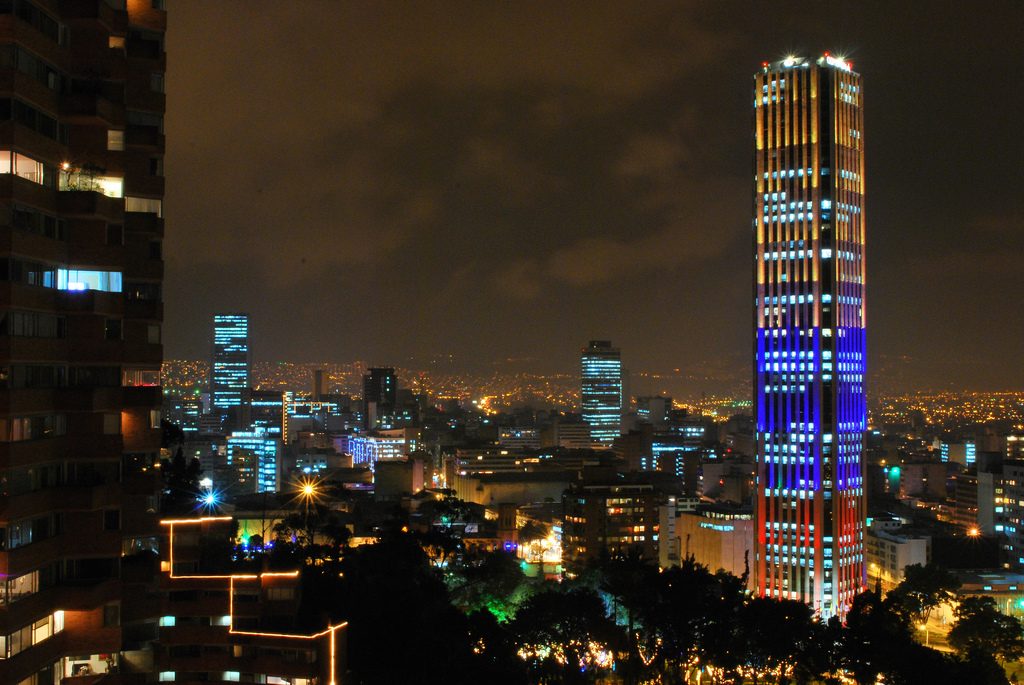 Designed by Terranum Arquitectura, the Novartis building in the city of Bogota is the headquarters of the pharmaceutical company of the same name and is the first Colombian Building to receive the LEED certificate granted by the U.S. Green Building Council.

This project has 9,700 square meters on 9 floors and two basements. In addition, the building saves a 37% of energy, thanks to a natural ventilation system that maximizes natural light and it has a 15.500 gallon tank to reuse rainwater.

Additionally, it has the first green roof in Bogota; which comprises 450 square meters of vegetation that is intended to contribute to the reduction in global warming.

If you want to find out why Colombia is the answer, please see these articles:

Discover Medellin! Four tourist routes with something for everyone