Get to know Colombia’s beautiful and varied traditional clothing

Colombia-
From the high, cool mountain regions to the low, warm coastal zones, Colombians have adopted beautiful traditional clothes as diverse as the country’s nature and terrain.

As Spanish settlers mixed with indigenous inhabitants of what would become Colombia in the 16th century, so too were born various cultural groups, with their own customs, rituals and manner of dressing. Made with natural fabrics and often with bright colors, these pieces have become iconic across Latin America. Here is a sampling of some of the most typical garments worn across Colombia:

The world’s longest mountain range creates a number of different climates in Colombia, reflected in the diverse clothing worn in the Andes.

Among the most recognizable is the typical dress in Huila, used traditionally when dancing the Sanjuanero dance. Women wear a ruffled white blouse that hangs off the shoulders, adorned with lace and sequin. A wide skirt–opened during dance–is made from colorful satin and lace, often with colorful floral decorations. She wears colorful flowers in her hair. The men’s dress is more simple, but equally important: a simple white shirt and trousers, a red scarf, leather belt and a hand-made hat.

In the more temperate rural coffee belt region, the female coffee collector, called the chapolera, wears a white long-sleeve blouse and a flowing skirt, usually with colorful designs and flowers, and white sandals. Men, called arrieros, are accompanied by horses and mules to collect coffee, and wear twill trousers, a printed shirt, handkerchief around the neck, sandals and a hat. The outfit is always complemented by a poncho as well as a small carriel bag draped over one shoulder and a machete at the waist. 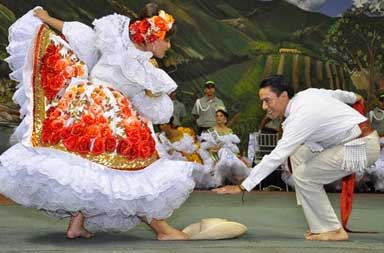 In the warm, rugged plains of Eastern Colombia, where horseback riding and cattle ranching are a way of life, the clothing is normally light and simple.

To dance the traditional Joropo dance, women wear a wide skirt that falls to the knee, featuring a number of different fabrics, with a red or white background and flowers. A three quarter sleeve blouse is decorated with ribbons matching the skirt, and ribbons or flowers decorate her hair. The men traditionally wear white pants rolled up the leg, for crossing the river, and a black or red shirt. He often wear black pants with a white shirt, as well as a wide-brimmed hat, made of heavy material as to not fly off when riding a horse. 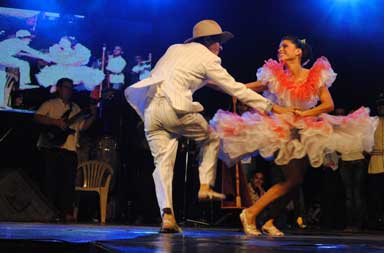 In the coastal Caribbean region, light and airy clothing is used to combat the heat and humidity.

Men traditionally combine bright colored shirts and linen pants, or in other parts of the region, they wear white pants and a white shirt, with a typical woven bag draped over one shoulder. Women wear light and flowy skirts and tops. And there are few items more Colombian than the “vueltiao” hat, or sombrero vueltiao, which comes from this region. The black and white brimmed hats are woven from dried cane leaves and worn across the Coast. In 2004, the hat was declared a Cultural Symbol of the Nation.

In the department of La Guajira, bordering Venezuela, the Wayuu indigenous group retains their folklore, including their dress. The Wayuu women wear a loose dress and sandals with woolen tassels, according to social rank. They weave the traditional and colorful Wayuu bags. 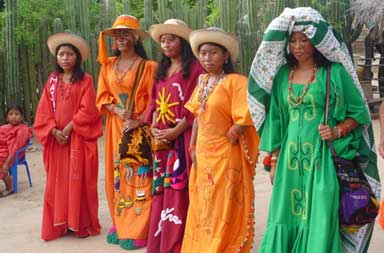 In the sparsely populated Amazon region, a number of indigenous groups have their own ways of life and of dress. Many groups exist semi-nude. 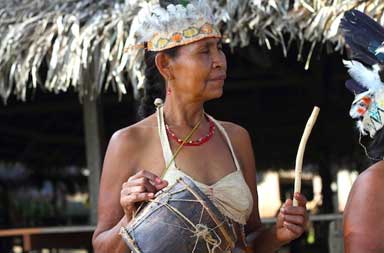 On the Pacific Coast, inhabitants dress for the heat, and large black communities retain traditions originating in Africa, including their clothing and folklore.

Traditionally, women wear colorful, pastel clothing, made with soft fabrics and sewn with flowers, ribbons and other flourishes and designs. Skirts fall to the ankles, and are equally colorful. Men, also, wear loose and colorful clothes, with shoes or sandals made out of natural materials and plant fibers.

African influence can be seen in Pacific communities, especially during special events and dances, such as through head wraps and other colorful adornments and accessories. 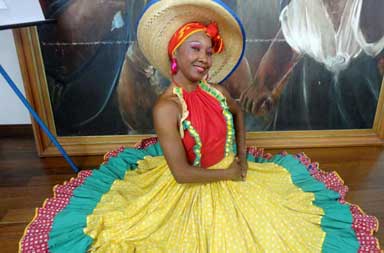 Colombia, Land of a Thousand Rhythms