Vallenato, the history of an entire region

Valledupar is the hottest place in Colombia, a city built on scorching plains that stretch between the region’s huge snow-capped mountains, with a mango tree on every corner and vallenato music everywhere you turn. But what makes this city so special and why did UNESCO decide its culture was worth protecting?

Valledupar was once the home of indigenous tribes including the Chimilas and Tupes, ruled by a powerful chief known as the Cacique Upar. That’s where the city gets its name (Upar Valley) and vallenato, in turn, means “born in the valley”. The region’s farmers are said to have inherited the traditions of Spanish minstrels (juglares) and West African griots, singing, chanting and playing their instruments as they travelled from town to town with their cows, sharing news and messages. Eventually their African and indigenous instruments, such as gaita flutes, the guacharaca and drums, were joined by the European accordion and vallenato as we know it was born.

Vallenato today consists of three core instruments, a small drum (caja vallenata) held between the knees and played with bare hands, a tradition brought to Colombia by African slaves. The second is the guacharaca, an indigenous instrument designed to mimic the call of the guacharaca bird and initially used for hunting and dating rituals. It’s ribbed and wooden and scraped with a three-pronged fork. Finally, there’s the accordion, originally from Germany. And that’s one reason vallenato is so special. It weaves the three stories of Colombia (indigenous, European and African) into one unique genre. 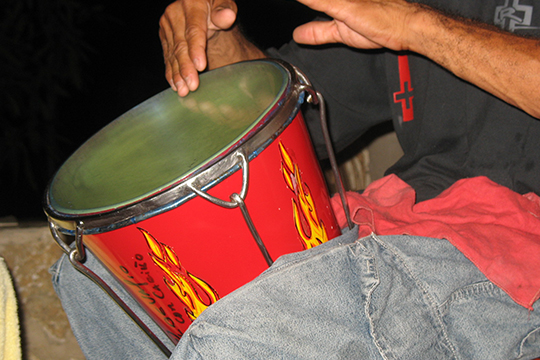 What is the story of vallenato?

This musical genre wasn’t always so appreciated. The roots of the music lie with those farmers, desperate for news and stories of their old friends and loved ones and fond of weaving a few jokes, not to mention gossip and smut, into their songs. That ensured the elite classes turned their noses up at the genre until a few wealthy patrons insisted on bringing the music to the Valledupar Social Club so they could drink and hear the juglares’ stories (nowadays people do dance to vallenato, but many continue the listening tradition) Alfonso Lopez, then Governor of Cesar, journalist Consuelo Araujo and songwriter Rafael Escalona created the Vallenato Legend Festival in 1966 to crown the best of the best.

The festival is held every April in Valledupar and searches for the best drummers, guacharaca players, lyricists and songs of the genre but it’s really the accordion players who steal the show (in the past accordion players would sing themselves, nowadays they pair with singers). Vallenato music has four different beats, known as “airs” (son, paseo, puya and merengue) depending on the song’s mood and its lyrical structure, and it’s up to the accordion player to set the pace. Every year these musicians compete to be crowned Rey Vallenato (Vallenato King) at the Vallenato Legend Festival and every ten years, the festival’s kings compete against one another to be anointed King of Kings.

What is vallenato according to UNESCO?

UNESCO says traditional vallenato lyrics “interpret the world through stories that mix realism and fantasy” in songs that are “nostalgic, joyful, sarcastic and humorous” and that’s why the genre must be protected. They want to safeguard the street spaces where friends and families organize parrandas (vallenato gatherings) and ensure the classic form of the music is not marginalized as singers and groups diversify and modernize its sound. The organization says traditional vallenato plays a “crucial role in building a regional shared identity” and that’s why it must forever be protected.

(You may also enjoy: Everything you need to know about cumbia)

Music that has told the story of a country through the centuries? Live this experience in Colombia. If you liked this article please feel free to share it on Facebook, twitter, LinkedIn, Google+ or any of your social networks.

Colombia: Land of a Thousand Rhythms