Eight Colombian products that are setting trends across the globe

Colombian products continue to set trends and conquer markets across the world. Here are some products carrying the Made in Colombia stamp that are at the top of buyers’ wish-lists worldwide.

Verdi Design created a unique accessory that honors the heritage of one of Colombia’s most symbolic handicraft and gives it a unique twist by incorporating copper fibers into a bag produced according to Colombian tradition.

Fashionistas from across the world have fallen in love with the Verdi Mochila, enchanted by the way the copper on this beautiful bag is worked into a fine metallic lace. The Verdi Mochila is entirely handmade, also it represents “the connection between humanity’s spirit and mother nature” and captures the essence of the people of Colombia, according to Verdi Design.

You may also be interested in: 5 Colombian designers, international trendsetters

Celebrities charmed by the Verdi Mochila include Elle USA editor-in-chief Nina Garcia, one of the judges on the Project Runway reality television show and American businesswoman Iris Apfel, who is both an interior designer and a fashion icon.

It’s all about the details.❣️

Fashionistas adore handmade products, especially when it comes to jewelry and other important accessories. Trends towards minimalism and geometric shapes have propelled iconic pieces such as Daniela Salcedo’s Third Eye ring into the spotlight.

This statement ring is made out of bronze bathed in 24-carat gold and its eye-catching design adds a striking and self-assured note. It’s no wonder this example of Colombian artistry is adorning the hands of ‘It Girls’ not just in Colombia, but across the globe. 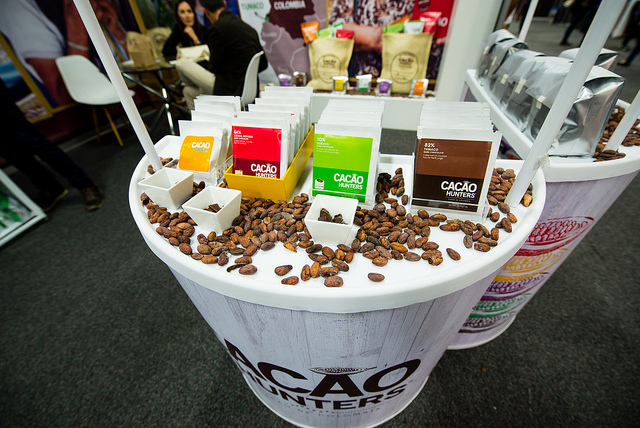 Colombian company Cacao Hunters chocolate has become one of Colombia’s most desired exports, having won prestigious awards including the Americas Gold Medal and the World Gold Medal at the 2016 Chocolate Awards. It’s particularly popular in the United Kingdom, United States, Belgium and Japan, among others.

You may also interested in: Why is Colombian chocolate so special?

Colombian entrepreneur Tata Harper’s anti-ageing serum, made from natural ingredients, moisturizes skin, restores volume and minimizes the appearance of wrinkles, as well as boosting collagen production in order to achieve a firmer and more radiant appearance.

Harper, from Barranquilla, has turned her brand into a favorite among celebrities including Gwyneth Paltrow, Emma Watson and Anne Hathaway.

Experts consider Parce Rum one of the world’s best and it scooped six different awards at the 2016 World Spirits Competition, held in San Francisco, USA.

The liquor is manufactured in a free trade zone in La Tebaida, Quindio, located in the Coffee Cultural Landscape, and sold in Duty Free shops in Bogota, Medellin and San Andres airports.

Parce Rum has already conquered the palates of eager consumers in Korea, Peru and France, thanks to its quality and flavor.

Distinctive patterns on SYOU’s sneakers ensure they stand out from the crowd. Their colorful prints reflect Colombia’s unique culture and traditions.

SYOU sneakers come in six different designs, inspired by Colombia’s flora and fauna and its celebrated coffee culture. Colombian Santiago Oliveros is responsible for each design, also the sole of each shoe is hand sewn to ensure its durability. SYOU sneakers are produced 100% locally, including design, materials and production.

A post shared by MantelesyCacerolas (@mantelesycacerolas) on Jan 2, 2019 at 7:56am PST

This handcrafted pottery is handpainted by the residents of El Carmen de Viboral in Antioquia and its vivid colors ensure each piece is a work of art. Customers can even request customised designs.

The most popular, and most traditional design is the Viboral, part of a group of designs that have helped this small town take its place as one of Latin America’s most important artistry centers. A new line called Viboral Renace has since been launched, which has a wider range and colors to complement the traditional design.

Traditional forms and symbols used by the Eperaara Siapidaara indigenous community have made their ‘four teat’ purses a hit with those who visit Guapi, in Cauca.

You may also be interseted in: Five places to visit if you want to learn about Colombia’s indigenous culture

Each purse takes between five and seven days to be made in a detailed process that begins with the picking and drying of fibers. The fibers are dyed naturally before being transformed into an example of Colombian handicraft now sold internationally.

These are just some of the Colombian products setting trends across the globe, examples of how Colombia’s cultural richness inspires Colombians and helps them spread the word about their country through their products.

If you want to know more about Colombian products, please visit: