ariadna-
If you’re into Latin rhythms, then you’re definitely into Colombian dances. Discover our cultural heritage with the most popular music genres that have even made it to the Super Bowl!

The International Dance Day and why Colombian dances are celebrated

The world celebrates International Dance Day every year on April 29th, a tradition that started in 1982. This date honors the creator of modern ballet Jean-Georges Noverre’s birthday and aims to celebrate the art form of dance that crosses all political, ethnical and cultural barriers. The ultimate goal? To bring people together through the common human language of dance.

Our country is no stranger to this message, as we are known as “the land of the thousand rhythms”. We embrace our cultural heritage, recognizing 1,025 folk rhythms grouped into 157 different genres and their dance expressions. Our blend is a mixture of Spanish influences, with indigenous sounds and African beats.

Colombian music is an invitation to dance, to connect with ancient roots and let the rhythm flow through your body. You may have witnessed this at the 2020 Super Bowl’s halftime show, as JLo and Shakira showcased the champeta challenge, the Mapalé, and Colombian salsa dances performed by the Swing Latino dance company.

Much of the popularity of being recognized as a great dancer comes from reputable dance academies. These dance studios travel all over the world to showcase the best moves of every Colombian dance. Some are more focused on regional rhythms mixed with contemporary ballet, while others focus on emerging dancing styles and techniques. The most famous are:

Other academies with notable recognition include Corporación Pazcífica, Chocó to Dance, and ConCuerpos, among others.

The most traditional dances in Colombia

Now that you know about our dance academies, discover the Colombian dances you should practice for this upcoming International Dance Day!

The Cumbia dance, the leading cultural heritage in Colombian dances 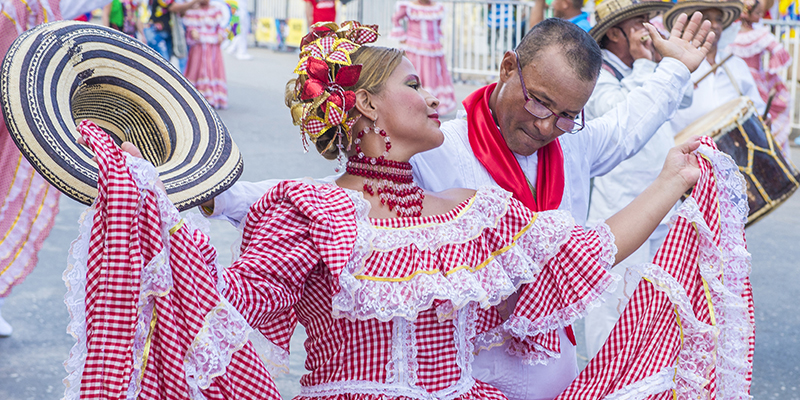 The cumbia is a musical rhythm and a folkloric dance blend between European, African and indigenous cultures. It is the most representative in the country, and was popularly introduced by famous Colombian composer Lucho Bermúdez in 1946. It dates back to the colonial times in the Caribbean region. Some see in cumbia the mythical personification of a king named Cumbé.

It is a beautiful dance in which a man in a traditional all-white peasant garment with a red scarf and regional sombrero mimics a courtship ritual to a woman wearing a long white and red skirt and a bolero blouse with carnations or roses on her head. The couple dances in circles to the rhythms of flutes, drums, and African and Indigenous percussion instruments.

The Mapalé dance, be ready to shake your body as fast as you can

This is another typical dance of the Caribbean region, widely spread nationally and internationally due to its popular moves where men and women dance without touching, convulsively to the beat of frenzied drums.

The Mapalé dance represents the work of man in fishing, where the dancers evoke the movements of the fish flapping out of the water trying to survive, and those of other animals in the fisherman’s environment. Its name comes from the fish species Cathorops mapale.

This Colombian dance represents the strength of the Africans during colonial times when the community gathered to express their cultural heritage with chanting and drums. This dance manifests notions of resistance, an important art form to be remembered this International Dance Day. 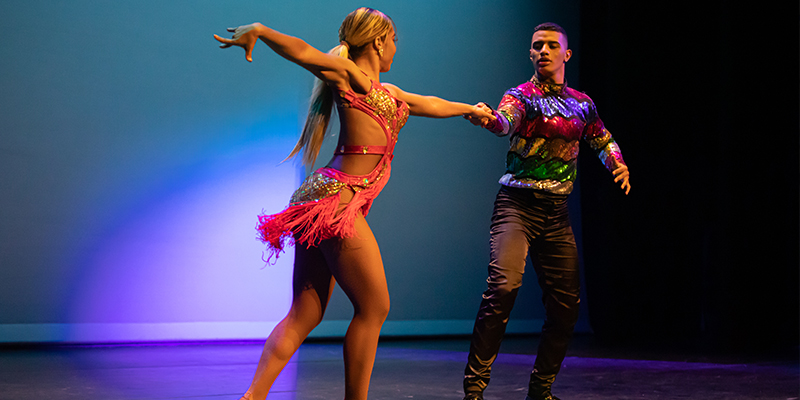 Although salsa is not originally from Colombia, we have managed to infuse this popular Latin dance with our very own flavor. Salsa arrived to our country from the port of Buenaventura, in the Pacific Region. From the moment the first salsa vinyl record arrived here, the Colombian salsa revolution was underway, eventually, eventually making its way through Cali and Barranquilla.

It wasn’t long before Caleños decided to create their own Colombian salsa with bands like Grupo Niche and Guayacán. Naturally, this evolution led to a change in the salsa dancing steps which are very different from regular salsa. This Colombian dance has to be performed with a lot of agility, especially from the waist down, considering that the feet move so fast it appears they have casters underneath.

It is a very passionate dance filled with musical flavor, where the man leads and the woman gets carried away. Caleños dance with such feeling and flow that there are more than 100 Colombian salsa dancing academies, with Cali being known as ‘The Salsa Capital of the World’ as some of the most important international competitions are held in this city.

Bambuco, one of the most representative Colombian dances

This is one of the most representative musical and choreographic expression of Colombian folklore, combining indigenous rhythms and European sounds that resemble the polka and other dances from Basque origins. The Bambuco was born in the Andean region and was widely spread throughout the country. It is a couples dance with brief tender moments of contact between the dancers.

This Colombian dance is also a flirtatious game as the couple always moves in suggestive gestures. The man shyly pursues her and the woman responds with naive flirtation. The woman is dressed in an extensive long skirt to enhance her theatrical movements and emphasize the flight of her skirts, similar to a can-can style. Both flex the feet to execute a jumping dance and recreate a scenic figuration, and men take off their hats as a courtship gesture.

The main instruments of the Bambuco are the tiple (small 12-string guitar), guitar and bandola (flat-backed lute).

On the Colombian eastern plains, people dance to Joropo

The word Joropo, refers to the act of gathering to play music, sing and dance. It is a cultural heritage from the Spanish fandango which was popular during festive occasions, when men and women from a higher rank used to play the harp, vihuela and guitar, recalling old trovadas. It is the main Colombian dance in the Colombian eastern plains also known as Los Llanos Orientales.

The choreography is similar to the European waltz, where the couple is holding onto their partner one moment, and then separates again to perform a move with their feet. This step simulates sweeping the floor, followed by dancing styles that resemble flamenco stomping.

Now that you know about the best Colombian dances to celebrate this International Dance Day, we hope you try them yourself soon!

The top 10 places to learn to dance in Colombia