Discover the Colombian Massif and its riches

ariadna-
Let us travel to the Colombian Massif, from Huila to Cauca and Nariño, passing through Tolima and Putumayo. Here you will find some of the absolute best Colombia has to offer.

Welcome to the Colombian Massif! Get ready to find some of the most mysterious and most beautiful places in our country. Let us begin our journey! 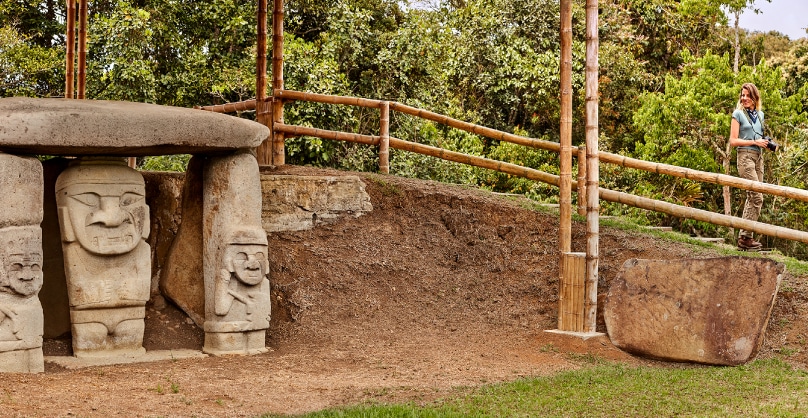 The San Agustín Archaeological Park is one of the Colombian Massif’s most iconic places.

We begin our tour of the Massif with the department of Huila, where you’ll find the legacy of pre-Hispanic communities across its great archaeological heritage. In fact, it’s home to one of the most spectacular places in the country—an ancient land of early human rituals which is now the San Agustín Archaeological Park.

In San Agustín, the richness of the pre-colonial history of Colombia stands out, highlighted by a mystical ambiance that impregnates travelers’ souls. It is an impressive, interesting, and magical destination of the Colombian Massif that you simply cannot miss if culture and history entice you, on top of spectacular natural landscapes.

It highlights over 500 funerary statues of still-unknown origins, often attributed to the first cultures that inhabited this region more than 2,000 years ago. This makes the San Agustín Archaeological Park one of the largest necropolises in the world!

Neiva, the capital of Huila, has plenty of comfortable hotels for tourists. So does Pitalito, the gateway town to the entire archaeological and tourist area of ​​this southeastern department.

The Nevado del Huila is an active stratovolcano located in the central Andean Mountain range of Colombia, right in the middle of the Massif. Its summit reaches 5,364 masl, making it the fourth-highest mountain in the country after the twin peaks of the Sierra Nevada de Santa Marta and Cocuy’s Ritacuba Blanco.

For fun, you can visit the Los Lagos theme park in the municipality of Palermo and Astrosur in Villavieja. Among the natural places to escape to for rest and ecotourism are the Magdalena Strait, the Betania dam and the Tatacoa desert.

The Tatacoa Desert is the second-largest arid zone in Colombia after the Guajira Peninsula. Located in the municipality of Villavieja, north of Huila and between the Magdalena River and the Eastern Andes, the Tatacoa is not a proper desert—it is a dry tropical forest. Its name is also given to rattlesnakes in this area of the department, unlike other regions of the country where they call harmless black snakes Tatacoas.

What to do in Nariño? 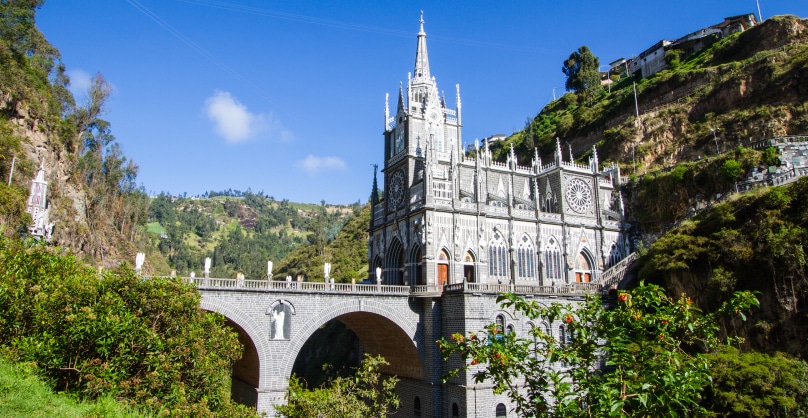 This is the Sanctuary of Las Lajas in Nariño. One of the most amazing places of the Colombian Massif and one of the most beautiful churches in the world.

In the southernmost Massif you’ll find the department of Nariño, with natural places to unwind and enjoy ecotourism like the Túquerres plateau, the La Cocha lagoon and The Sanctuary of Las Lajas. In this department there are several festivals and cultural events such as the Blacks’ and Whites’ Carnival, the Tumaco and Currulao festivals, the festivities of La Mujer, Virgen del Carmen, Las Mercedes and San Juan.

Behold the Sanctuary of Las Lajas, a temple well known to Colombian Christians. Its architecture and appearance have added a magical quality to its surroundings, like something out of a fairy tale.

You’ll find it in Ipiales, Nariño. Its full name is The Sanctuary of Our Lady of Las Lajas. Its main building is 27.50 meters high, its towers 100 meters, and it has a bridge that is 50 meters long and 17 wides over the steep valley below.

This beautiful temple houses precious stones and luxuries within it, and it is well known for its painting with a gold crown, sapphires, diamonds, pearls, and emeralds. In this sanctuary you’ll also see the famous flat slabs and wide gray stones that surround the whole place. It has often been named among the most beautiful churches on Earth.

A little over 40 minutes from Pasto by car, you’ll encounter La Cocha Lagoon. You definitely have to visit this wonderful place of the Colombian Massif. This unforgettable site hides in a mist as though frozen but beams bright with the warmth and light of the sunniest day. At its center lies La Corota island, which legend claims used to be a woman who was turned into an island out of jealousy.

It is also said that La Corota island was the totuma, or bowl, that spilled the water which fills the reservoir. 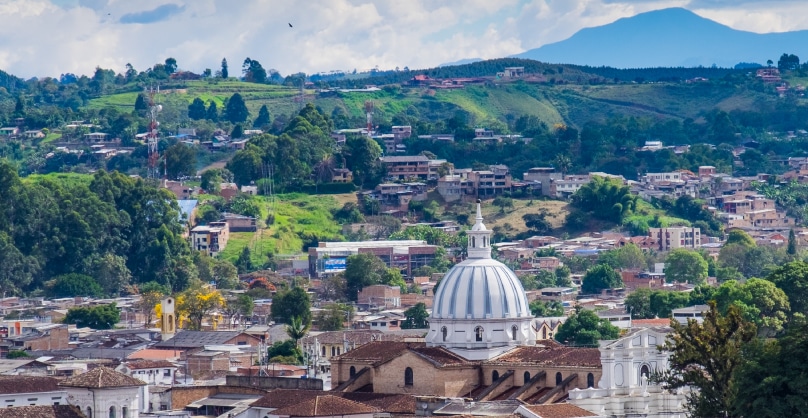 Popayán, nicknamed “the White City of Colombia”, is the pearl of the Massif.

You’ll find that the department of Cauca, in the Colombian Massif, has countless natural and anthropological tourist attractions. This wealth is unmatched since very few regions of Colombia have such cultural, climatic and natural diversity in their territory.

The varying altitudes of the department of Cauca offer visitors the chance to experience beautiful landscapes like the snow-capped volcano, Nevado del Huila, mountains and rivers that form amazing deep valleys such as the Patía, natural lagoons such as Magdalena and Buey and three national parks, all ranging from chilly to warm temperatures.

You’ll have to travel to the Puracé National Park. This important park in the Massif is popular for its richness in flora, fauna, geology, and hydrography, which features hot springs, geysers, and waterfalls. The Munchique is listed as one of the richest in variety of bird species, mammals, reptiles, and rodents.

And don’t forget the Tierradentro Archaeological Park, which is one of the largest pre-Columbian attractions in Colombia. It comprises a vast area of ​​tombs dug under the surface of the earth and painted in different shades of red and black. The most important archaeological sites in this park are El Duende, Alto de San Andrés and El Aguacate.

Another very important place to check out on your visit to Cauca is its capital, Popayán. This very beautiful colonial city, commonly called the White City because of the color of its houses, is home to various historical, architectural, and cultural heritages of the country such as churches and museums.

The largest migration to Popayán occurs during Holy Week when people flock to the city to admire its famous processions, which has been listed as an Oral and Intangible Heritage of Humanity by UNESCO, not only for its beauty, but for the effort made by those in charge to maintain this majestic tradition year after year.

Natural destinations to enjoy in Tolim 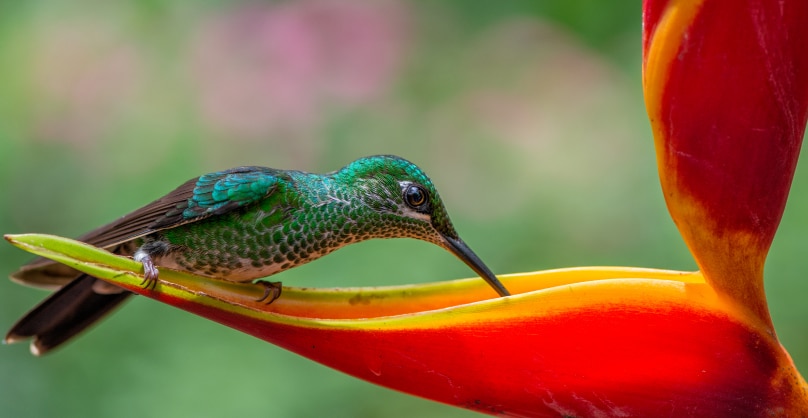 Heliconias are a type of plant located at the Orchid Nature Reserve in Tolima, Colombia

In Tolima one of the most wonderful things, you’ll find is the Orchid Nature Reserve where visitors can enjoy 180 species of orchids, represented in more than 8,000 plants, 10 species of guaduas and bamboos, 60 species of heliconia, 30 species of bromeliads, 15 species of araceae, as well as a sample of fruit and timber trees.

It also has areas suitable for safe camping within the nature reserve. Visitors can bring their tents or rent them from the orchid garden. The reserve has different environments for adventure, rest, group activities and training.

It is dedicated to the conservation, use and management of biodiversity, ecotourism, environmental education, and cultural development to generate social, environmental, and economic benefits, within the framework of sustainable human development.

You will also find the San Jorge Botanical Garden, which is a birdwatching destination, where visitors can observe birds in daytime or nighttime tours; this service is aimed at all audiences, particularly those interested in bird watching and photography.

The garden has an inventory of 211 species in a natural environment, each one with its own technical sheet that can be consulted in the Bird Guide at San Jorge Botanical Garden (2016), and a checklist to facilitate their identification.

If you head further south, you will find the beautiful town of Natagaima on the road that leads to Neiva, 65 km from El Espinal. This is a gastronomic destination where the festival of San Juan, held on the Christian holiday celebrating the birth of Saint John the Baptist on June 24, is particularly festive. A must in your trip to the Colombian Massif!

What can you see in Putumayo? 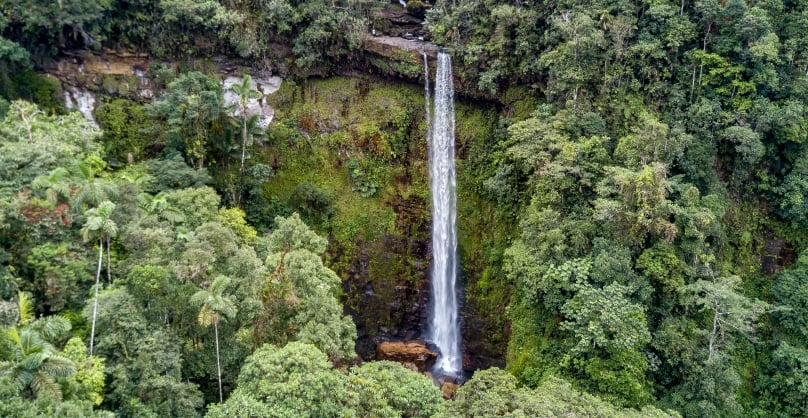 A beautiful waterfall in the jungles of Putumayo, in the Colombian Massif.

This last part of the Colombian Massif features the department of Putumayo, characterized by its flat highlands. Two different areas can be distinguished within this department, the first is the mountainous western border with the department of Nariño. This is where the Patascoy and Putumayo hills stand out.

With heights that exceed 3,500 masl and a unique topographic conformation, you can experience a variety of climates from cold to warm.

From there, you will head east across many tourist attractions, like the Río Vides archaeological park, the Serranía del Churumbelo, the Mandiyaco Canyon, the Sibundoy Valley, and many other natural wonders that eventually head to the lush rainforests of the Colombian Amazon-Orinoco. 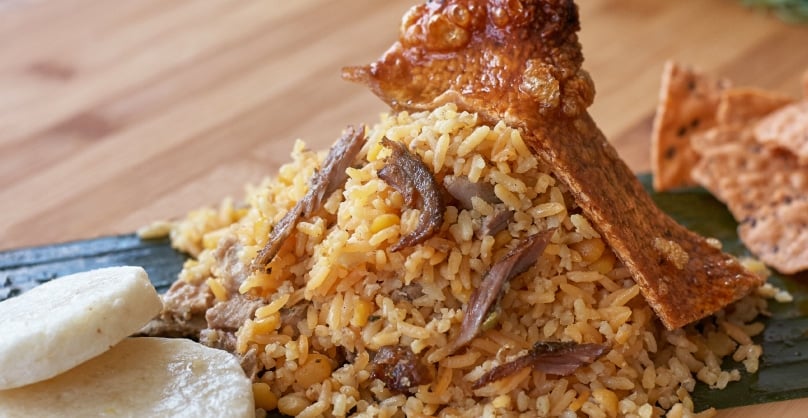 This right here is a tasty lechona, a traditional dish of the northern Colombian Massif

The traditional dish of Nariño is the famous cuy, a roasted guinea pig native to this region, which goes rather well with pastuso potatoes and steamed eggs.

Among the most culturally cherished foods that Cauca has to offer, you will find the exotic champús, a delicious drink made with lulo, corn, pineapple, panela, cinnamon, cloves, and orange leaves that is shared with the neighboring Colombian Pacific region. While visiting, you should also try the lulada, made with crushed lulo and sugar; the tambourines that are a dry and powdery biscuit; the tortilla soup, a broth with potato, meat substance and corn tortillas; and the puerquitas, also called marranitas, that are prepared with crushed green plantain and pieces of toasted pork.

If you are quite the carnivore and find yourself in Tolima, you must try the lechona, which is a suckling pig or pork marinated with fried peas and lard, usually served with white arepas. Other options include the traditional tamal tolimense which consists of rice, beef, dried peas, pork, egg, potatoes, chicken, garlic, onion, and coriander. One of the best plates in the entire Massif!

The gastronomy in Putumayo is as varied as it is exquisite. One such example is el tacacho, a puree that is prepared with green plantain that you can find wrapped in corn and drizzled with Amazonian fruit juices, resulting in a concert of typical Colombian flavors. You can also find it wrapped in corn or yucca. Don’t leave without trying some caimarón wine, chicha de arracacha, carambolo juice, or any of the destination’s other typical dishes.

Humpback whale-watching: The privilege of the colombian Pacific