Colombia: A Country with Opportunities of Investment

Colombia-
During the last ten years. Colombia has not stopped growing, it’s economy, and the confidence for the investors there has […]

During the last ten years. Colombia has not stopped growing, it’s economy, and the confidence for the investors there has been constant progress that is reflected in it’s statistics. The Gross Internal Product (which measures the economic growth of a country) has been kept in an average of 4,7 % in the last 13 years, while the foreigners’ participation in the Stock market of Colombia (BVC), mediating buyers and sellers, grew from 4 % in 2006 to 26% in July 2014.

The Economic Commission for Latin America (CEPAL), the good performance of the Colombian economy has been due both to policies internal development as an opening to international markets. 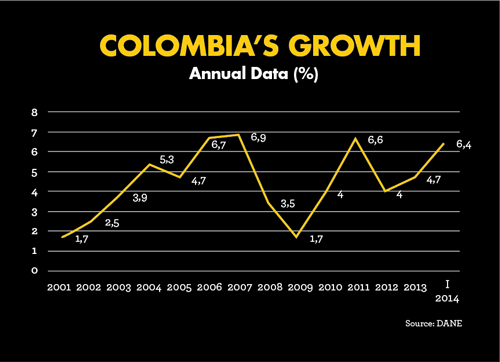 In this way, during the last years 20 treaties have been negotiated at the Free Trade (FTA), of which 13 are in force and in operation, five have been signed, but they are in the process of regulation, and two are ongoing.

In addition, international promotion through events, as Colombia InsideOut who leads the BVC and which seeks to attract investment to the country, through meetings between the Presidents of the issuing companies of shares and investors groups.

Colombia has also become a destination for resources foreigners thanks to the creation in 2011 of the integrated market Latin American (MILA) arising from an agreement between the stock of Chile, Colombia and Peru. The MILA allows the negotiation of the three actions countries through local intermediaries.

But not only the international opening through tariff rebates and promotional events have attracted investment and promoted the growth of the country.

Internal economy measures, as a good control inflation on the part of the Banco De La Republica, and policies aimed at the stimulation of consumption and purchase of housing, also have put their grain of sand.

ECLAC, explains it is the lastest economic study of Latin America and the Caribean, in the chapter dedicated to the country: ¨ the Plan impulse to the productivity and employment ( PIPE) contributed to the expansion of economic activity, especially in the construction, housing, the trade in agriculture, and to a satisfactory performance of the labor market that allowed an increase of the final consumption of households¨.

This is how the country has managed to boost it’s marketing locally an internationally, creating the perfect combination to reassure investors and promote enterprises of the country.

Learn more about the Colombian economic growth and find out why in foreign trade, the answer is Colombia

Five reasons why foreigners are investing in Bogotá real estate