Colombia-
Did you know that a building weighing 7000 tons was moved in Colombia for the expansion of an avenue? Find out more about two of the most iconic buildings in the country.

Thanks to their vision, talent and experience, Colombian engineers and architects have been able to transform urban spaces through innovative techniques that managed to turn the country into a reference for the construction industry worldwide.

This is the story behind the Cudecom and Avianca buildings that besides being milestones of Colombian architecture and engineering, are an example of innovation for the world.

Originally located at the intersection of 19th Street and Avenida Caracas, in the center of Bogota, the Cudecom building represents a major worldwide achievement in engineering.

This office building, built in 1955, had 8 floors, weighed 7000 tons and was one of the most modern and highest of its time. Years later, at the beginning of the ‘70s, Bogota began to grow rapidly, which required the construction of new roads to connect the center to the west of the city.

To this end there was a need to broaden 19th Street, but at the design stage of the works the engineers encountered a problem: the Cudecom building was located right in the middle of the land that was needed for said extension.

After evaluating the possibility of demolishing the building, –which was in perfect conditions, the architect Antonio Páez Restrepo was given the task of convincing the District of moving the building 29 meters to make way for the new road.

It was an unprecedented project. In 1851 the Marble Arch monument was moved in London, and in 1936 the same had been done with the Yalova Atatürk’s mansion, owned by Mustafa Kemal Atatürk, the first president of Turkey; but never before in history it had been tried to move a building of the Cudecom building’s proportions.

After a year of negotiations, the historical event that marked a before and after in the history of engineering in the country took place on October 6, 1974: a team of 400 people, including engineers, technicians, builders and assistants, was given the task of moving the building. To achieve it a one thousand-ton mobile structure composed of steel rollers five to seven centimeters in diameter and seven hydraulic jacks were used. 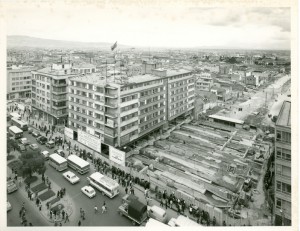 The move took 10 hours, at an average speed of eight inches per minute, and due to its historical importance it was televised through the public broadcasting service (Inravisión). Following the move, two floors were added to the initial structure and a parking facility was built in the adjacent space.

For this work, the engineer Antonio Páez Restrepo received for the second time the National Engineering Award from President Alfonso López Michelsen.

For 30 years, the Cudecom building appeared on the Guinness Book of Records as the heaviest structure to have been moved from place. In 2004 this distinction was taken over by the Gang Fu building in China. 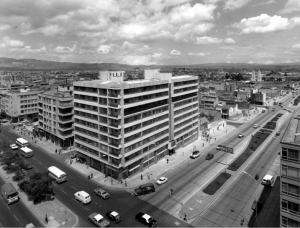 Located in the Parque Santander in Bogota and designed by the architect Germán Samper Gnecco between 1962 and 1968, the Avianca building was the first skyscraper built in Colombia and in 1969, was one of the tallest skyscrapers in Latin America.

One of the most important innovations of this building was the design of a range of peripheral circular pits to ensure the stability of the soil and the foundations. Furthermore, the Avianca tower was one of the first buildings in Colombia to implement seismic standards.

On July 23, 1973, a fire occurred on the 14th floor of the building. Thanks to the mechanical facilities being centralized in a series of vertical ducts, and the stairs being separated from the façade by protective walls, the people who were in the first 12 floors of the building were evacuated without any incidents through the stairs.

The remaining ones managed to climb to the terrace roof and although the building did not have a helipad, they were picked up by a helicopter and taken to the Plaza de Bolívar. According to the official figures, the fire left a toll of 40 dead and 73 wounded.

The tower is 150 meters high, has 37 floors and due to its design and technological innovations became a landmark of Colombian architecture and a must for students of architecture and engineering. 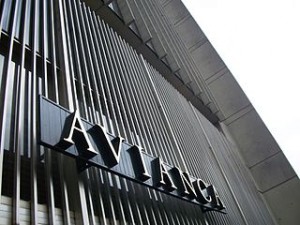 The Cudecom and the Avianca buildings are two construction milestones that demonstrate why Colombia is also an answer in infrastructure and innovation.

If you want to find out more about the progress of Colombia in terms of infrastructure, please see these articles:

5 amazing green inventions made by Colombians

Four places to visit in Colombia made famous in songs