Five Colombian waterfalls you have to see to believe

Colombia is Indiana Jones’ country, a world of natural wonders that are just waiting to be explored. And what could […]

Colombia is Indiana Jones’ country, a world of natural wonders that are just waiting to be explored. And what could be more wild and untamed than rivers that race through the jungle before turning into waterfalls that fall uninterrupted for thousands of feet? Here are five Colombian cascades that are well worth the journey:

La Chorrera takes the crown for being the highest of the Colombian waterfalls, the sixth-highest in Latin America, and falls for almost 600m. The falls are reached following a two-hour hike through the serenity of Colombia’s cloud forest, just 45 minutes from the hustle and bustle of Bogota. Hikers pass the famous “monkey stones” (hanging rocks that form simian-like figures) and a smaller waterfall, El Chiflon, before La Chorrera confronts them from the forest. Most visitors can’t resist climbing down to the bottom to bathe in its spray. (You may also enjoy: Colombia’s Diverse Mountain Climates)

La Chorrera may be Colombia’s tallest falls but Salto de Bordones is the country’s longest uninterrupted waterfall, free-falling for more than 400m. Unlike La Chorrera, it’s near impossible to climb down to the base of these falls, so visitors usually just enjoy the view from a lookout point on the other side of the valley – a platform that juts out over the river. Most people visit Salto de Bordones as part of a tour beginning in the nearby town of San Agustin, which also includes stops at many of the region’s archaeological sites and another nearby waterfall,  El Mortiño. 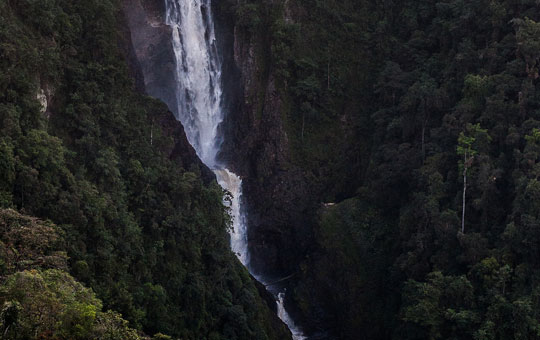 If La Chorrera is Colombia’s highest waterfall, and Salto de Bordones its longest free-falling falls, then Salto de Candelas may just be the most powerful. This waterfall, 70km from the city of Sogamoso, is terrifying in its ferocity and the sheer volume of water that flies through the air or snakes over its rocks. The waterfall forms part of the journey of the River Cusiana, one of the region’s most important water sources. Many visitors combine a trip to these falls with a hike through the stunning Paramo de Oceta nearby.

The Tequendama Falls are probably the most well-known in Colombia, mostly because of the iconic – and somewhat spooky – Hotel Tequendama that faces them. They have long been the source of local legend thanks to the Muisca indigenous people, who believed one of their Gods created the falls to release the water that covered the savannah (which then drained to make way for their villages, including Bacata, now Bogota) The water falls for around 130m. (You may also enjoy: San Agustin and Isnos: The keys to Colombia’s past) 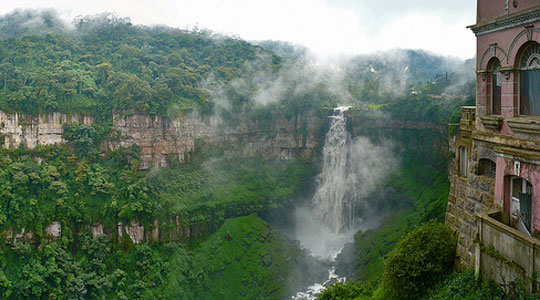 The curiously-named Tisquizoque Windows is a natural marvel and well worth making the journey to see. This waterfall flows out of a huge cave (the “window”) before falling in steps down the side of the mountain. Best of all, visitors can hike deep into the cave and follow the path of the river before it gushes out into the open air. The official name of this waterfall is “La Ventana” and, once it begins to free-fall, it falls for around 300m without interruption. The nearby city of Florian is nicknamed La ciudad de las ventanas abiertas (the city of open windows) in homage to this spectacle. (You may also enjoy: The Top 10 Essential Colombian Experiences)

Want to experience some of the world’s most impressive natural wonders? The answer is Colombia. If you liked this article please feel free to share it on Facebook, Twitter, LinkedIn, Google+ or any of your social networks.