Colombia-
Every year more than 20,000 classical music lovers from every corner of the earth descend on the coastal city of Cartagena for its International Music Festival, held every January. But what makes the city’s musical extravaganza such as success?

What is the International Music Festival?

Cartagena’s International Music Festival celebrates its 14th anniversary this year and it continues to attract the best of the best. Not only does the festival make clever use of the Caribbean city’s unique acoustics, it also has an original approach to its annual theme. Past festivals have focused on the works of Mozart and Bach, “The Italian Style” (2013) and “Fables” (2014) and the festival approaches each theme from both the old and “New World” perspective, mirroring the history of the colonial city itself. The 2016 theme will be Hacia Tierra Firme (Toward the Mainland) and the festival will be a musical voyage, tracing the steps of Christopher Columbus from late 15th-century Spain to the New World and centuries of cultural integration.

Why is the festival so famous?

The festival hosts more than 40 concerts every year in world class venues including San Felipe castle, La Popa hill, Getsemani auditorium and the Adolfo Mejia theater and its international guests give free master classes to hundreds of young Colombian musicians. There are also workshops where children, students, professional musicians and music teachers are trained in everything from instrument maintenance to bagpipe building, plus exhibitions, conferences and other educational activities. This year’s performers will include greats such as Rinaldo Alessandrini (the director of Concerto Italiano) Spanish composer, conductor and viol player Jordi Savall and the Grammy Award-winning Orpheus Chamber Orchestra, from New York City. (You may also enjoy: Five Colombian sopranos excelling in international lyric theater)

Cartagena is Colombia’s most romantic city and the jewel in its coastal crown, a walled city with a long history that’s flooded in orange every evening as the sun sets on the Caribbean. It’s hard to imagine a more perfect setting for the world’s best in classical music. Besides a range of places to stay, from plush, five-star hotels to more humble hostelries, the city is full of museums, such as the Palace of Inquisition, the Maritime Museum, the Gold Museum and the Museum of Modern Art. San Felipe castle and San Pedro Claver’s church and monastery are well worth a visit and, of course, Cartagena is full of fabulous bars and restaurants. It’s an ideal place to take an evening stroll on the city wall, imagining the ghosts of pirates who besieged it in the past. (You may also enjoy: Where to see classical music in Colombia).

How do I get there?

Cartagena is a global destination and easier to reach than ever. You can fly direct from Bogota, Cali, Medellin and San Andres or from Panama, Miami, Fort Lauderdale and New York City. Buses run regularly from Barranquilla and Santa Marta and, if you’re feeling adventurous, you can take the sailboat from Panama City, although that does involve a three-day stop in the San Blas islands. 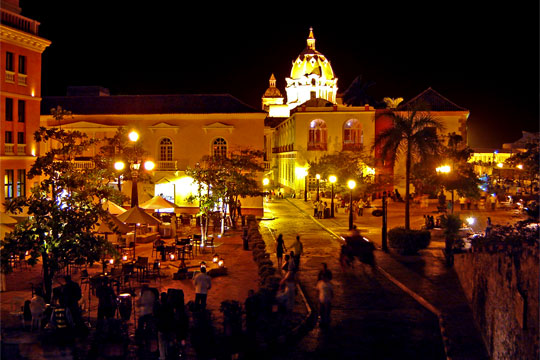 Do you want to see the world’s greatest musicians in the world’s most romantic city? Live this experience in Colombia. If you liked this article please feel free to share it on Facebook, Twitter, LinkedIn, Google+ or any of your social networks.