Your guide to Cartagena’s Hay Festival

Colombia-
Cartagena is a city of dreams with its colorful balconies, colonial streets and vivid sunsets that bathe its walls in orange as the Caribbean sea crashes on its shores. Such a romantic setting is ideal for the world’s most famous literary festival. Here is everything you need to know to join in the festivities:

Why?
Cartagena was the first country permitted to hold a Hay Festival outside of Wales, where this literary festival was founded. The story goes that Colombia’s favorite author, and Nobel Prize for Literature laureate, Gabriel Garcia Marquez was invited to the festival but was unable to attend. Mexican author Carlos Fuentes declared: “If Gabo cannot go to the festival, then the festival must come to Gabo,” and it did. Cartagena has hosted a Hay Festival of its own since 2006.

What?
Former US President Bill Clinton once described the Hay Festival as the “Woodstock of the mind”. It’s a festival of stories and ideas, celebrating and discussing literature, journalism, visual arts, politics, music and the environment with talks, workshops, interviews and readings.

When?
The festival will run from January 30th to February 2. 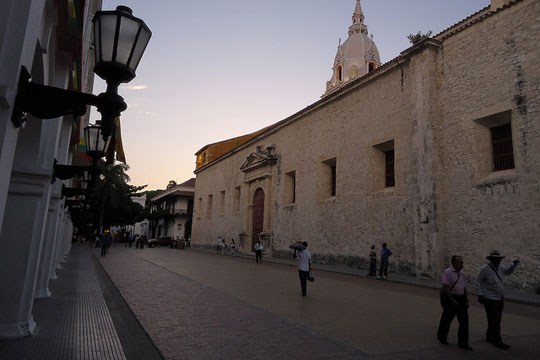 Who?
The Hay Festival attracts some of the biggest names in world literature, cinema, politics and music. Guests in 2016 will include Nobel Prize for Economics winner Joseph Stiglitz, The Buddha of Suburbia author Hanif Kureishi and Lionel Shriver, author of We Need To Talk About Kevin, along with Colombian writers Piedad Bonnett and Mario Mendoza and essay writers Yuval Noah Harari and Johann Hari. Guests from the world of cinema will include actors Emma Suarez and Leonardo Sbaraglia and director Stephen Frears. Fonseca, Pedro Calvo and the Cuban orchestra, Karamba, will represent the world of music.

How?
Tickets can be purchased online or at outlets, including shopping malls, in Bogotá, Medellín, Cali and Barranquilla. Direct flights to Cartagena operate from Bogotá, Cali, Medellín and San Andres as well as Miami, Fort Lauderdale, New York City and Panama. Visit www.hayfestival.com/cartagena for more details on the festival and to purchase tickets.

Do you want to experience a literary extravaganza in an inspiring coastal city? Visit Colombia. If you liked this article please feel free to share it on Facebook, twitter, LinkedIn, Google+ or any of your social networks so we can keep bringing #TheBestOfColombia to the world.