Amazon-Orinoco, a place of fantastic experiences

ariadna-
Live the best experience traveling and getting to know the Colombian Amazon - Orinoco, discover an unforgettable destination!

The colombian Amazon-Orinoco is the green heart of Colombia, a land of ancient forests and colossal skies, formed by two regions of extraordinary importance—the Amazon rainforest and the Orinoco Eastern Plains—which are home to formidable rivers, thunderous waterfalls, impossible rock formations and fascinating cultures.

Places that make up the Amazon-Orinoco

This travel guide will show you the most beautiful places to visit and the best experiences to try around the Amazon-Orinoco region in Colombia. Let’s get started!

Arauca has one of the most striking landscapes on Earth: The Eastern Plains of ColombiaIts people are recognized for their hospitality, joy, and for their love of dance. In fact, the entire plains region is well known for its ‘joropo’ dance.
This department of the Amazon-Orinoco which shares a border with Venezuela, boasts tourist destinations like the Museum of Culture and the José Antonio Páez International Bridge, where the best of two great nations comes together.

Here you’ll see some of the most amazing sunsets while visiting the Colombian Amazon-Orinoco.

The department of Casanare in the Amazon-Orinoco has countless tourist attractions to choose from. You can enjoy live music and dances as well as myths and indigenous legends that make up the cultural fabric of the population. Joropo is its flagship rhythm and coleo, a cowboy tradition, its best-known cultural heritage.
The contrast between mountains and plains paints landscapes of truly unique beauty. The purest water flows from its northwestern Andean moors down to the plains which spread in east and south with their exotic flora and fauna—especially birds. From a cultural standpoint, you can enjoy the historical attractions of places like Pore, the region’s Heritage Town, which preserves barracks that were of great importance for the country’s Independence process.
Among the natural places you’ll find here, you may opt to unwind and try ecotourism in the Tinije lagoon, the Cusiana river. In this department, festivals and cultural events are held regularly, among which you’ll find festivals such as Aguazul, Chámeza, Hato Corozal, Banda Criolla, and Rodeo.

In this department of the Amazon-Orinoco you can take part ina multitude of festivals and cultural events such as the Llano Las Colonias, La Cachama, Canoero and Coleo international folk and tourist festivals, as well as the national and international Joropo Tournament, the Catama fair, and the San Martín groups.

Caño Cristales, a multicolored river in the Serranía de la Macarena in the Colombian Amazon-Orinoco.

Among the natural locations for rest and Amazon-Orinoco you’ll find the La Macarena, Tinigua, Chingaza and Sumapaz natural national parks, the Santo Domingo hot springs, Yucao river, Honda stream falls, Güejar canyon and, perhaps the most famous attraction of them all: Caño Cristales, the melted rainbow that flows across the landscape.

The beauty of Vichada is easy to admire, and Alexander von Humboldt even declared to be the eighth wonder of the world upon arrival because of its great variety of animal species. Some noteworthy locals include the araguate, the night monkey, the widow, the white-faced cornstarch, and the horned cornstarch—all of them primates. You can even catch a glimpse of pumas, anteaters, otters, squirrels, and savanna deer during your visit.

Some natural surroundings ideal for leisure and ecotourism include the Tuparro National Natural Park, the Meta and Orinoco rivers, and La Bandera and Santa Elena hills.

Puerto Carreño, the capital of the department, is one of the most beautiful places to visit in the Amazon-Orinoco region, on the border between Colombia and Venezuela. There, you can enjoy bird watching, and, if you’re lucky, you might be able to spot all its over 320 species, which include woodpeckers, cocks-of-the-rock, curlews, herons, paujiles, turkeys and guacharacas, among many, many others.

Another absolute must tourist destination in Vichada is El Tuparro National Natural Park. Or, if you’re in the mood for something mystical, you can also visit the old cemetery of the ecotourism include the Tuparro National indigenous Maipure people.

In this department you’ll enjoy several cultural events such as the Corrío Llanero International Tournament and festivals such as Colonias and Encuentro de Tres Culturas, El Cachicamo de Oro, Cumare, and the folkloric Reinado del Curito.

The Vaupés, Apaporis, Isana, Papurí, Querarí and Taraira rivers make up the iconic scenery of a territory coursed by the pure, plentiful waters it enjoys in a world that watches this natural resource become increasingly scarce.

Navigating these rivers provides an opportunity to observe local birds and other species of flora and fauna that can’t be found elsewhere in the world. It’s an activity you simply can’t skip when in the Amazon-Orinoco The region’s ecosystem is completely unique, boasting 586 species of wildlife, 96 species of fish and 550 species of birds.

Navigating the rivers of the Vaupés department is a must on your visit to the Amazon-Orinoco.

Tourism in Guainía, although still in the earliest of stages, offers mind-blowing natural wealth. You can try water sports in the Matevení, Pavón, and Payara lakes or in the Inírida river, the latter which will lead you to the surreal Cerros de Mavecure (Mavecure Hills),as well as the Las Brujas lagoon, and the Sapuara stream.

The Puinawai National Natural Reserve is one of the most popular sites to visit in the department of Guainía in the Amazon-Orinoco, and one of Colombia’s most protected areas. Puinawai comes from the word “Puinave” which translates to “Mother of Humanity”. The Puinave are a native tribe from the Amazon rainforest

This department is a place of striking nature and beauty. Don’t forget to visit the “Lost City”,the hot springs, the Chiribiquete  and Nukak National Natural Parks, the Guayabero River, and the Dorado Caño while you’re in the Amazon-Orinoco some of these places boast lagoons that are home to the iconic pink dolphins.

The Nukak National Natural Resrve is a protected area categorized under the Amazon Forest Reserve Zone. This reserve houses and protects different ecosystems, allowing it to enjoy a great flora and fauna variety. This reserve is the ancestral territory of indigenous groups such as the Nukak, Curripaco and Puinave.

But perhaps one of Guaviare’s most precious gems is the Chiribiquete National Natural Park. Colombia’s—so far—only mixed Heritage Site. UNESCO declared it so because of the ridiculously lush greenery that surrounds its towering tepuis and the miles of rock paintings on the cliff faces that date back over 12 thousand years and are yet to be entirely deciphered.

The Guayabero river in San José del Guaviare across the Colombian Amazon-Orinoco.

“Caquetá where gold is green”.

Known as the heart of the Colombian Amazon the department of Caquetá has a massive wildlife, foliage, and floral wealth that any country would envy. More than seven rivers traverse this land and support its incalculable species of insects, fish, reptiles, mammals, and birds.

Among the natural oasis you’ll find for rest and ecotourism are the Picacho Natural Park and the Chiribiquete Mountains, the Araracuara Mountains, and the Yarí Plains. All treasures on the Colombian Amazon-Orinoco.

Festivals and cultural events are held here, such as the Festivals of Interpreters and Composers of Colombian Folk Music “El Colono de Oro” and the folkloric and departmental Reinado por la Paz y la Cultura (Reign for Peace and Culture), with traditional music concerts and the department of bands also being regular attractions.

The Putumayo department offers countless tourist destinations. There are places of interest such as the Lost City (not the same that hides in the Sierra Nevada de Santa Marta! This one’s not man-made) on the Congor River and the Vides Archaeological Park.
Among the natural places suitable for rest and ecotourism are the Colón hot baths, the Caliyaco-Mocoa river, the Churumbelo waterfall, the Guácharos cave, La India waterfall, and La Paya National Natural Park.

Here you can meet indigenous peoples of the Amazon-Orinoco and experience their culture.

Currently, tourism in this department revolves mainly around the Amazon Trapezium, Colombia’s southernmost region, surrounded by Peru to the west and south and Brazil to the east. Among its main tourist attractions are the Ethnographic Museum of the Amazonian Man, which testifies to the infinite wisdom of Amazonian indigenous cultures, and the Island of the Monkeys.

The lakes of Yahuaracas, Tarapoto, and Zacambú are also very popular amongst visitors. You can also visit the villages of the friendly indigenous communities of the Ticuna and Yagua ethnic groups as well as the community of Hitoma. Thanks to its rich folklore including myths, legends, and traditions, coming in deep contact with the Amazon rainforest is an intense experience worth living.

The Amacayacú park, located between the municipality of Leticia and the departmental district of Tarapacá, is characterized by its ridiculous diversity of wildlife, especially birds and mammals. 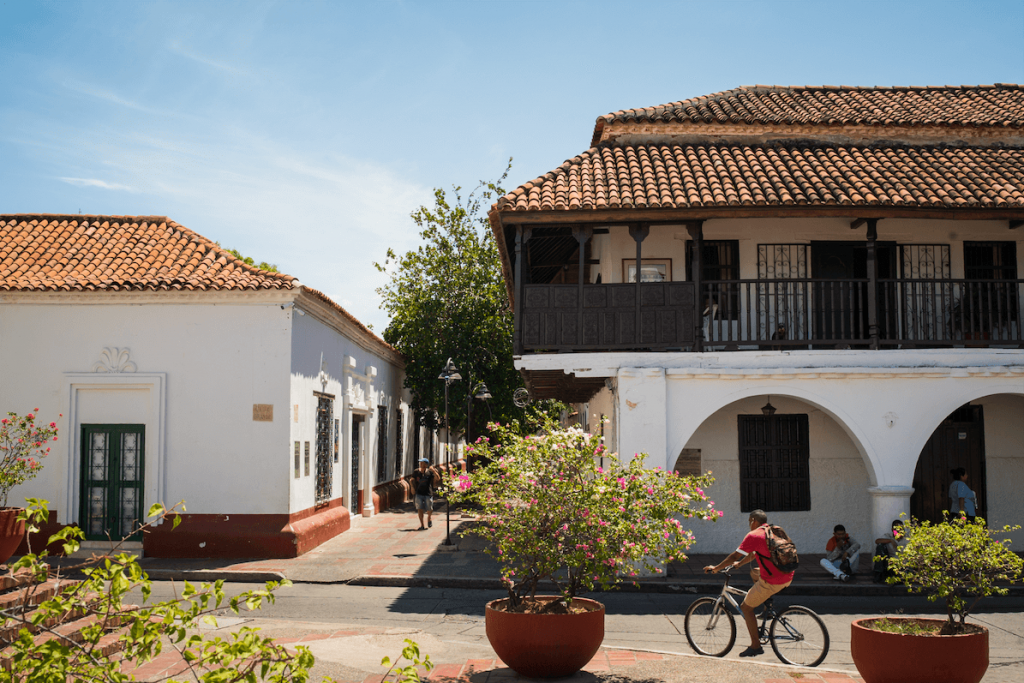 The Amazon-Orinoco offers all sorts of typical dishes. Starting out with Casanare, there you’ll find the mamona or ternera a la llanera (traditional veal roasted on a spit), sancocho de pato pelón llanero (duck meat broth), grilled cachicamo (armadillo), creole hayaca (tamales), and finally, the traditional pollero or bastimento (a plate made of fried plantain slices, fried pieces of beef or pork, gofios—sweet made of panela and corn flour—and pieces of cheese).

In the departments of Meta, Vichada, and Vaupés you’ll get to savor typical dishes as well as the mamona or ternera a la llanera, here accompanied with yucca (cassava) and chili. Try the llanero brandy cocktail with carambola, moriche chicha, and llanero or cashew. For lighter palates there’s the muñica, a fish dish cooked in broth, muguiado fish and meat, casabe, fariña, and ants.

Caqueta puts flavors on full display with dishes like muquiado fish (a cooking technique in which fish is wrapped in plantain leaves), chicken stew, and fish stew. Dairy products are also aplenty here, and it’s easy to find cheeses, yogurt, and fruits such as caimo, caimarón, badea, and cherries.

In Putumayo and Amazonas the typical dishes are smoked cachama, tacacho (both fishes), wrapped in yucca, wrapped in corn, sancocho de gallina criolla (chicken stew), and the divisive mojojoy: thick, juicy roasted scarab larvae (kind of something you’d see Timon, and Pumbaa from The Lion King enjoy). Would you try all these exotics plates during your visit to the Amazon-Orinoco?

Guide for Spending 48 Hours in Cartagena