If there is one Colombian food the country is famous for, it is without a doubt Colombian arepas. A meal as varied as the biodiversity of our colorful and vibrant country. Discover the significance of Colombian corn cakes and the places they come from.

What exactly are Colombian arepas?

Arepas are mostly known as corn cakes made out of corn dough or precooked corn flour in a flat circular shape, similar to a pancake. It can be cooked on a grill, fried, or roasted. Most of the time, Colombian arepas are the best companion to other dishes such as Bandeja Paisa or tamales. On the other hand, arepas can also be filled with other ingredients like ground beef, egg or cheese, making it a dish in itself and a real comfort food.

The history of corn cakes, or arepas, dates back to the Spanish conquest in the pre-Columbian era when the different indigenous groups harvested corn and made several preparations out of it as they considered it a gift from the gods.

Although there are over 40 types of corn cakes in Colombia. Here are the most famous ones in the country. 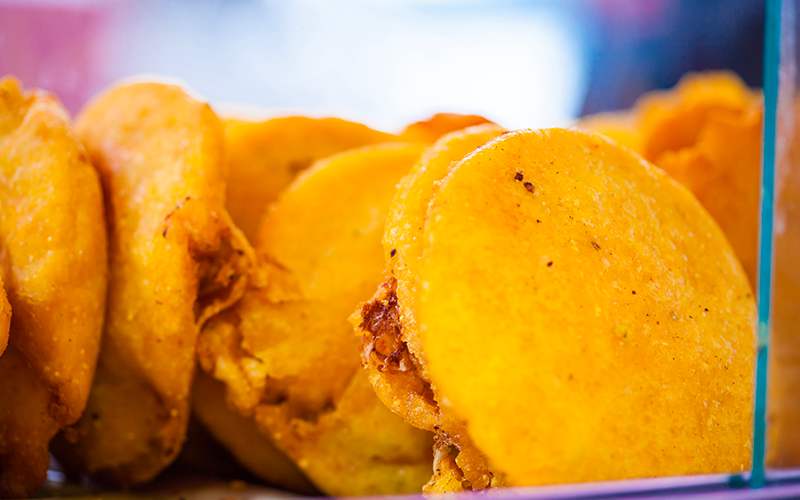 One of the most famous Colombian arepas you can find is the arepa e’ huevo, pretty much the most representative meal from the Caribbean coast. This arepa is a fried yellow corn cake filled with a whole egg inside. It sounds pretty simple but cooking it requires a great technique from the preparation of the dough to each step of the cooking process. The beauty of it is in its versatility: people can eat it for breakfast, lunch, or even dinner. Any time is good to try this delicacy!

The origins of arepa e’ huevo

The origins of this famous Colombian arepa are yet unknown. There is a clear dispute between Barranquilla and Cartagena as both cities claim to be the inventors of this delicious corn cake. In the first one, it is known as arepa e’ huevo as it is only stuffed with eggs. In Cartagena, it is known as an empanada (another type of fried corn snack) with an egg and meat. Yet the preparation is the same as only the filling changes. In the end, both are delicious.

Without a doubt, it is a very famous meal on the Colombian Caribbean coast, especially for travelers on the road close to Troncal del Caribe, a highway that connects the regions of Atlántico, Magdalena, and Bolívar on the north coast of the country.

In the region, the women are the ones who are experts in cooking arepa e huevo. They have inherited the tradition from descendants of women dedicated to the manufacture of arepas. Fruit of the heritage of indigenous corn, Spanish omelets, and African fried foods, this nutritious corn cake has been passed down from generation to generation for almost 200 years and is one of the main sources of food for all the people traveling the road of Cordialidad. This experience is a must for tourists who visit wonderful coastal cities or any part of the country.

Arepa de Choclo, the sweet and salty one 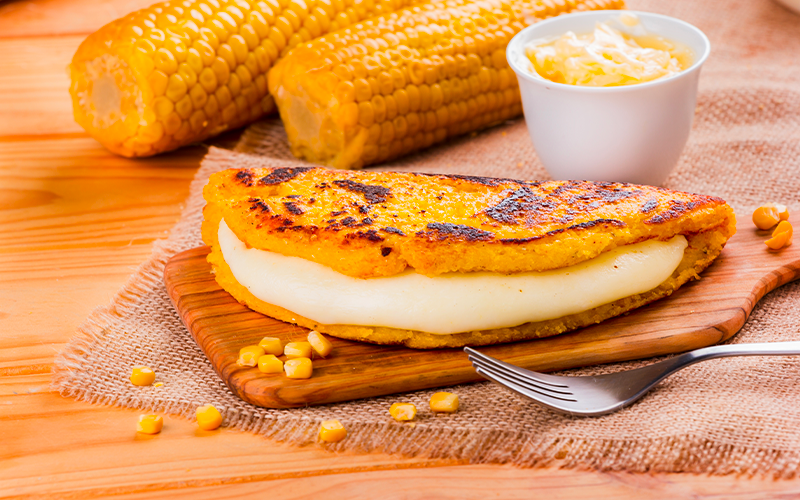 Choclo is the Quechua word for “tender corn”, which refers to fresh-picked corn. Therefore, arepa de choclo is the corn cake made with sweet and tender corn, that when mixed with melted butter and eggs forms a batter that is later cooked in small batches over a heated pan. This preparation is similar to that of pancakes.

Some variations of arepa de choclo involve splitting the corn cake and putting cheese similar to a sandwich. Other times, different types of cheese like curd, mozzarella or fresh cheese are used to fill it up. This delicious sweet corn cake can be part of a breakfast or can be served with hot chocolate late in the afternoon.

Where does the arepa de choclo come from?

Arepa de choclo is found in all regions of Colombia. However, it is known that it was first noted in the regions of Antioquia, Valle del Cauca, and Risaralda. These regions are close to the Coffee Cultural Landscape, inscribed in the UNESCO World Heritage list in 2011, a recognition awarded because it stands as an outstanding example of human adaptation to difficult geographical conditions on which hillside and mountain coffee farming are developed.

This area is home to a great biodiversity, such as the highest wax palm trees in the world in the Cocora Valley, a habitat also known for its many bird species.

The sweetest of the Colombian arepas: The arepa boyacense

Arepa Boyacense is a thick, rounded, and chunky corn cake prepared with precooked yellow corn flour or dry yellow corn. Other ingredients to prepare the dough include milk, butter, salt, and sugar or panela (molasses) to give it a sweet notorious flavor.

It can be cooked on a hot griddle, in a frying pan or wood oven. Similar to the arepa de choclo, it is often filled with curd or fresh cheese. This sweet corn cake is often served as part of a breakfast. It’s also a good snack during the day.

In the central part of the country, the eastern Andean mountain range plays home to the region of Boyacá and a small town called Ramiriquí. Famous for its friendly inhabitants, their archaeological heritage, fertile land for harvesting corn and an invaluable treasured tradition: making arepas boyacenses.

The town has one of Colombia’s largest rural areas, surrounded by the beautiful landscape of green mountains and colorful birds where over 6,000 farmers work the land to prepare the flour of the sweet corn cake in a process that lasts up to 8 months. For this reason, every year the municipality celebrates the international festival of “the corn, the sip and the arepa”.

The classic style of Colombian arepas: the arepa paisa 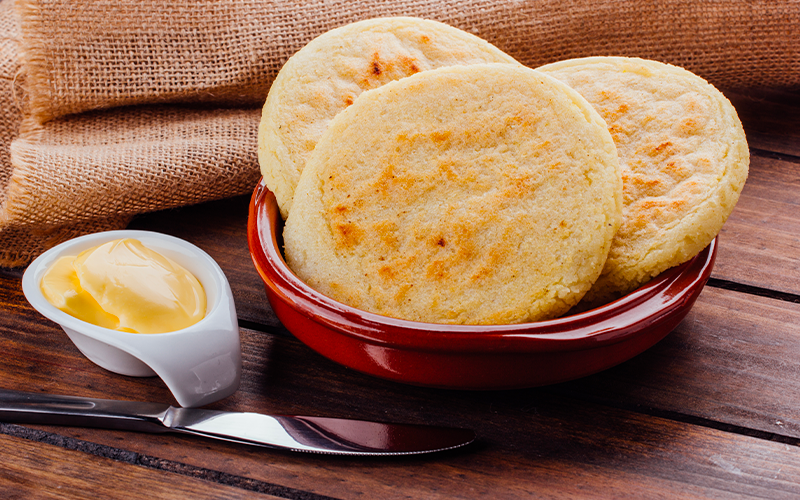 The arepa paisa might seem like the simplest of all the Colombian arepas, which can explain why it goes with everything. It is thin, white and the dough is purely based on corn with bran with no additions, not even salt. For this reason, it is the perfect base for butter, fresh cheese, butter or even hogao (a tomato and onion sauce with spices).

On the other hand, they can also be stuffed and cooked over charcoal to keep its distinctive taste. The arepa paisa is an unmissable side to every breakfast in the region, and like the other arepas it can be enjoyed in all the meals of the day.

The arepa paisa is from one of the most famous regions of Colombia: Antioquia

The second biggest region of Colombia is home to one of the country’s most visited cities: Medellín. A city known for being the most technologically-advanced hub of the country and one of the most innovative cities in the world. The region is also an economic engine of Colombia as many productive activities take place here, from livestock to textiles.

The paisas (the people of the region) are famous for being great hosts, hard workers and very innovative individuals. In the mountains of the region, the families prepare the dough by cooking the corn, as there is no place for precooked flour in the preparation of arepa paisa. This dish is not only the support for each family meal of the day but also for their daily income. 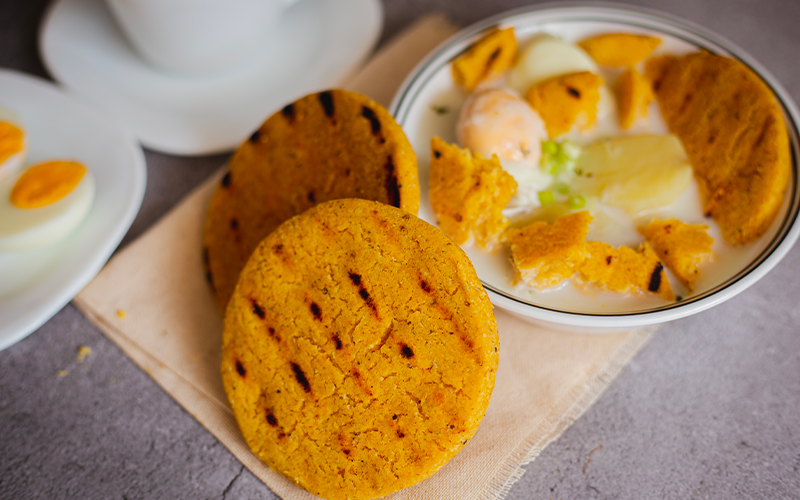 Chicharrón, or fried pork rinds, is easily one of the tastiest guilty pleasures of Colombian cuisine. This is why it’s found as a side in many regional dishes such as bandeja paisa. Arepa de chicharron, or arepa santandereana, is a corn cake that includes grounded corn, chicharrón and yucca in the same dough, making them a lot tastier and crunchier. This arepa is also grilled on both sides over medium heat on a grill and is the perfect companion to scrambled eggs, soups or beef.

Santander region, the land of adventure

In the north of Colombia you’ll find the region of Santander, an important place during the fight for the country’s independence. At the same time, a region known for brimming with nature escapes and extreme adventure sports such as rafting, paragliding, speleology in caves, bungee jumping, and more. As a matter of fact, it is the home to the second largest canyon in the world: Cañón del Chicamocha. No wonder why these arepas carry the extra meat you need to pursue all the activities in the region!

Now that you know all about the famous colombian arepas, we hope to see you soon here trying #TheBestOfColombia!

Without a doubt, Colombia is a country with many wonderful things to discover. In fact, Disney made a movie inspired in Colombia: Encanto. A beautiful show of Colombia’s traditions and characteristics that make this country so unique. Click here to know more.