This year Bogota’s beloved Rock al Parque celebrated its 20th birthday and the millions of music fans who had attended the event in the past knew exactly what to expect – a party. But not just any party. Rock al Parque is the biggest rock concert in Colombia and arguably the entire continent. So what makes it such a success?

What is Rock al Parque?

Rock al Parque – or Rock the Park – is a three-day, free rock festival held every summer in the capital’s Parque Simon Bolivar. The first festival was held in 1995, which means this year was actually its 21st installment.  But don’t let the name fool you. Rock al Parque includes genres such as punk, ska, heavy metal, blues and reggae.

Who goes to it?

Anyone with a passion for new music. Rock al Parque had humble beginnings, with gigs stretched across several city venues including the former bullfighting ring (Santa Maria) and the nearby Media Torta, but nowadays the music is mostly centred in Parque Simon Bolivar. There are usually around 50 artists playing each Rock al Parque and organisers tend to throw them all in together, rather than grouping them by genre, to give festival-goers a chance to sample something new.

More than 500 bands have played at Rock al Parque and they come from all around the world. Besides Colombian artists, who range from established superstars to trendy up-and-comers, there are plenty of representatives from Latin America, particularly Chile, Argentina and Mexico. But it doesn’t stop there. Dozens of artists have attended from the US and rock-loving countries in Europe, including Germany, France, Spain, the Netherlands and the United Kingdom. The most unlikely performers so far were probably the musicians of the Bogota Philharmonic Orchestra, who played the festival in 2005 and are testament to its diversity. 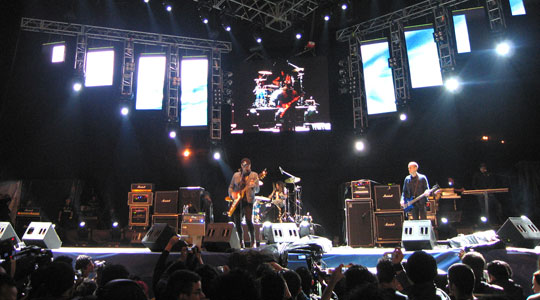 How does it work?

Organisers expect around 400,000 people to attend Rock al Parque every year and are used to accommodating such crowds. Smoking and the sale of alcohol are both banned, even though the festival is held outdoors, and festival-goers undergo a routine security inspection before they are allowed to enter. Sets normally start around midday and wind up by 11pm. Best of all, it’s free!

How can I find out more?

For news on the full line-up of artists, venues, workshops, competitions and more, visit Rock al Parque’s official website at www.rockalparque.gov.co. The site also has practical tips on how to attend the festival, including advice on public transport.

Want to participate in the world’s biggest festivals? The answer is Colombia. If you liked this article please feel free to share it on Facebook, Twitter, LinkedIn, Google+ or any of your social networks.