Working with furniture and other everyday items, this artist has carved sculptures and created works inspired by Colombia's history. This year, a traveling retrospective will be showcased in Chicago, New York and Miami.

Visitors at the Tate Museum in London, England, in March 2008 may have thought that an earthquake hit the British capital. However, The 547-feet long crack snaking across the floor of the museum’s Turbine Hall was part of a piece called Shibboleth by Doris Salcedo.

During an interview with BBC World, Salcedo defined this piece as an attempt to represent “the deep separation between humanity and those sidelined by society, stressing the strong, bottomless difference between these two worlds that can never reconcile”. 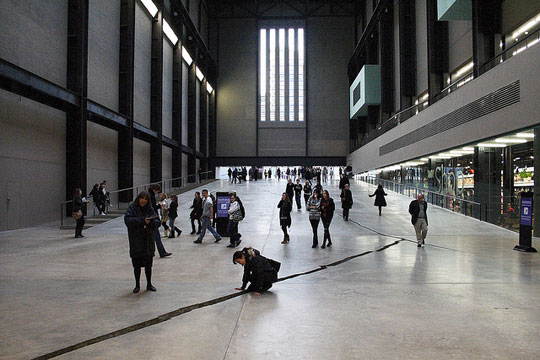 Doris Salcedo is not only the first Latin American artist showcasing her work at the Tate Museum in London, but also the winner of several awards, including the Penny McCall Foundation’s 2005 Ordway Prize, the 2010 Velazquez Award of Plastic Arts by the Ministry of Culture of Spain, and the Hiroshima Art Prize by the city’s Museum of Contemporary Art in 2014 to recognize her efforts to “show the potential of a strong resistance against the widespread violence and discrimination in the world”.

Her works have been exhibited at the Venice Biennale and prestigious venues like the Museum of Modern Art (MoMA) in New York, the Centre Pompidou in Paris, and the Queen Sofia National Center of Art Museum in Madrid, among others.

In addition, an traveling retrospective is being showcased in the United States, paying homage to the career of this Colombian artist who seeks to preserve a country’s past through her body of work. “Memories are the essence of my work. I truly believe that we cannot live the present or face the future without turning to our past”, stated Salcedo during an interview for The San Francisco Museum of Modern Art.

This retrospective, which opened last February in the Museum of Contemporary Art of Chicago, will be displayed in June 2015 in the renowned Guggenheim Museum in New York, and will reach its final destination in the Perez Museum in Miami in May 2016. This exhibition is an important honor for the artist, as these venues have featured very few Latin American artists.

Among the works included in this exhibition are The Widowed House (La casa viuda), Unland, Disheartened (Atrabiliarios), Skin-deep (A flor de piel), Mourning (Accion de duelo), and the Mute prayer installation (La instalación Plegaria muda), among others. The exhibition will also feature a short film about some of the artist’s ephemeral works like Shibboleth and its participation in the 8th Istanbul Biennial (2003), where Salcedo used the empty space between two buildings to create a 3-floor column made of 1,550 chairs to refer to the history of migration and displacement in Istanbul.

Please visit the Museum of Contemporary Art of Chicago official website to learn more about Doris Salcedo’s exhibition in the United States.

If you’d like to find out other reasons why when it comes to culture, the answer is Colombia, then please read the following articles:

The story of artisan behind the mochila bag in Colombia